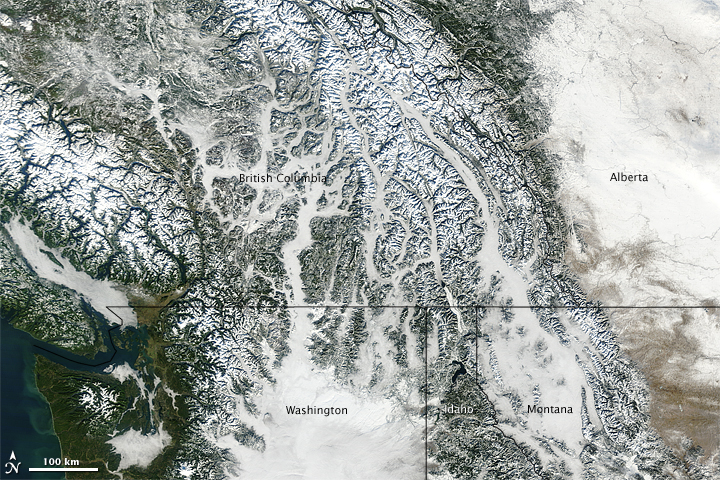 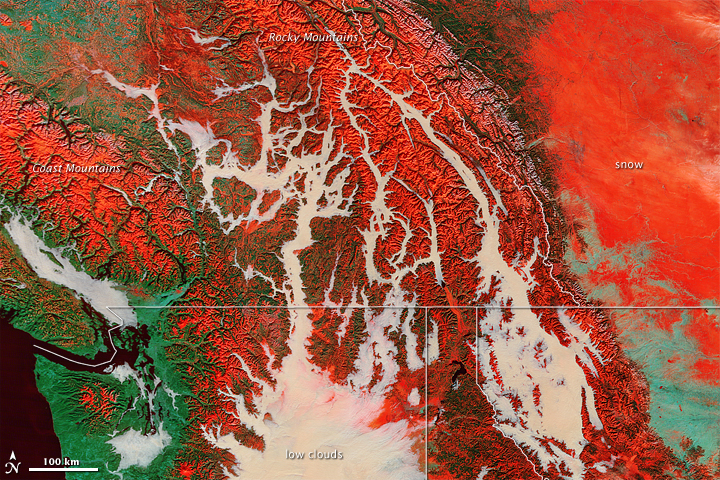 On the heels of a winter storm, snow topped mountain peaks while low clouds filled valleys in the Pacific Northwest in mid-January 2009. The view of the area from the Moderate Resolution Imaging Spectroradiometer (MODIS) on NASA’s Terra satellite on January 18 provided a perfect example of how false-color images that include non-visible wavelengths of light can reveal more about what is going on in a scene than photo-like images alone could provide.

The top image is a natural-color view that covers parts of British Columbia, Alberta, Washington, Idaho, and Montana. This photo-like view is made from MODIS’ observations of visible light. In this image, the landscape appears in shades of dark green, brown, and white. From an initial glance, you might decide that snow not only draped the mountain peaks and blanketed the prairie of Alberta, but also lined the deep valleys of the Rocky Mountains and the Columbia Plateau in central Washington.

The false-color version of the scene (bottom image) reveals that not all the white is snow, however. This picture is made from a combination of red light and shortwave infrared light, which our eyes cannot see. Snow and ice are red, while clouds and fog are white or pale peach. Liquid water on the ground is dark red, nearly black, and vegetation is green.

In the false-color image, the peaks of the Coast and Rocky Mountains have turned red, confirming the presence of snow. But in the deep valleys, what was white in the photo-like image is pale peach in the false-color image. The contrast reveals that it is low clouds or fog that fills the valleys of the Rockies and spreads in a wide expanse across Washington. Fog commonly forms in mountain valleys in the wintertime, especially where rivers add to the humidity.

Why do snow and clouds look the same in natural-color images but different in false-color images? Because both snow and clouds reflect all wavelengths of visible light, they both appear white in photo-like images. But snow and clouds do not equally reflect shortwave infrared light: snow absorbs it, while clouds reflect it. This difference in the way they interact with visible and non-visible light is what makes them look different in the different versions of the scene. Remote sensing scientists routinely use false-color imagery for mapping flood waters, classifying cloud types, identifying burned areas, and revealing areas affected by ice storms. 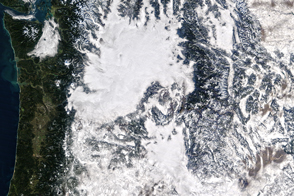 It takes infrared imaging to distinguish snow from clouds over the Pacific Northwest.