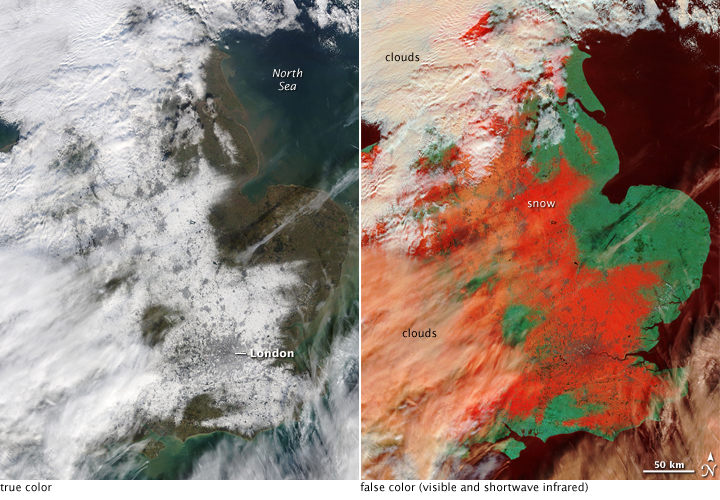 The Moderate Resolution Imaging Spectroradiometer (MODIS) on NASA’s Terra satellite captured this view of snow in England on February 4, 2009. The snow stretches from the English Channel north under a bank of clouds near the Scottish border. The winter storm that brought the snow in the first days of February blanketed southeast England with the heaviest snow the region had seen in 18 years, said BBC News. As much as 20 centimeters (8 inches) of snow fell on London. The poor weather closed transportation, schools, and businesses throughout southeastern England, reported BBC News.

Though clouds still lingered over parts of England, much of the storm-affected region was clear on February 4 when Terra MODIS captured these images. The image on the left is a photo-like view of the ground shown in “true color,” the colors the human eye would see if viewing Earth from space. Though both snow and clouds are white, the two have different textures. The snow highlights features on the ground. The buildings and roads of cities are darker under the snow, and as a result, London is actually easier to see than it would be on a snow-free winter day when the cement-colored city would blend with the surrounding brown landscape.

The image on the right shows the same scene in a combination of visible light (the kind the human eye sees) and shortwave infrared light, which is not normally visible to people. This combination of light generates a false-color image (one that does not match what a person in space would see) that makes it easier to differentiate clouds from snow. In this type of image, snow is dark red. Plant-covered land is blue-green, and water is black. High, icy clouds are light orange, while lower-altitude water clouds are white. In this image, the extent of the snowfall under the clouds is a little clearer. Patches of dark red peek through breaks in the clouds in both the west and the north.

The large images provided above are at MODIS’ maximum resolution of 250 meters per pixel. Both the true color and the false color images are available in additional resolutions from the MODIS Rapid Response System.

The first days of February 2009 brought a fierce winter storm to countries throughout Western Europe. England received its heaviest snowfall in 18 years.