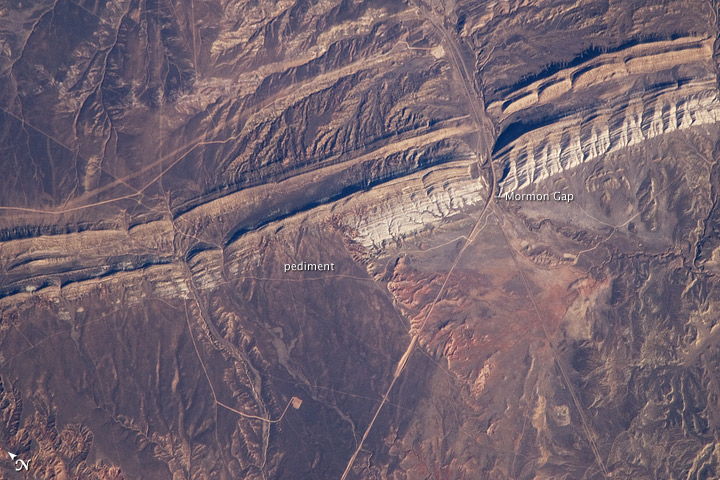 An important way to unravel the Earth’s history is to find and study old rocks that have been turned up and exposed on the surface through the Earth’s tectonic activity. At Raven Ridge (image center, left to right), which extends across the Colorado-Utah border, geologists can walk across successive layers of rock deposited approximately 54-50 million years ago during the Eocene Epoch—approximately 10–15 million years after the dinosaurs went extinct.

The sedimentary layers at Raven Ridge were originally deposited as flat-lying beds in an ancient lake known as Paleolake Uinta, and later they were tilted by tectonic forces. The tilted beds are visible in this astronaut photograph as hard, erosion-resistant ridges of tan, buff, and white rocks (freshwater limestones), with less resistant layers (mudstones and shales) forming valleys between ridges.

A prominent topographic break in the ridgeline, Mormon Gap, provides road access across the ridge. To the northwest of the gap, dark brown alluvial deposits (sand and gravel carried by moving water) extend southward from the crest of the ridge. These deposits likely cover a pediment—a flat, sloping surface of eroded bedrock that extends outward from a mountain front.

The rocks and fossils at Raven Ridge indicate that during the time when they were created, the area was covered in tropical forests that were filled with the early ancestors of modern primates, horses, and deer (among other animals).

Astronaut photograph ISS018-E-11127 was acquired on December 6, 2008, with a Nikon D2Xs digital camera fitted with an 800 mm lens, and is provided by the ISS Crew Earth Observations experiment and Image Science & Analysis Laboratory, Johnson Space Center. The image was taken by the Expedition 18 crew. The image in this article has been cropped and enhanced to improve contrast. Lens artifacts have been removed. The International Space Station Program supports the laboratory to help astronauts take pictures of Earth that will be of the greatest value to scientists and the public, and to make those images freely available on the Internet. Additional images taken by astronauts and cosmonauts can be viewed at the NASA/JSC Gateway to Astronaut Photography of Earth. Caption by William L. Stefanov, NASA-JSC, and Alexander R. Dutchak, University of Colorado, Boulder, Colorado.