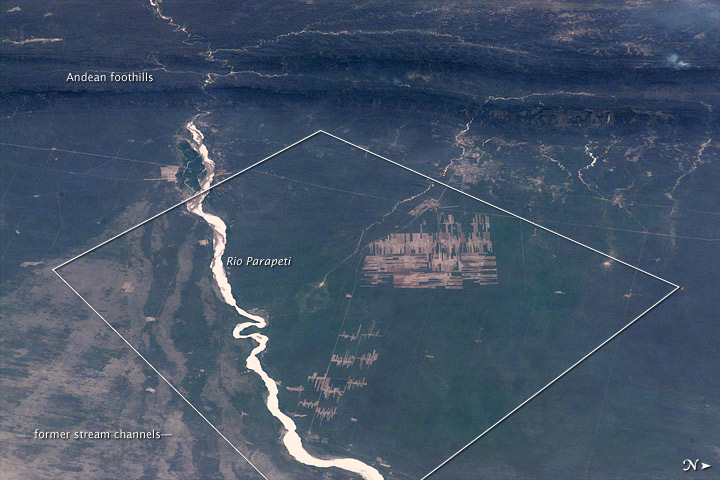 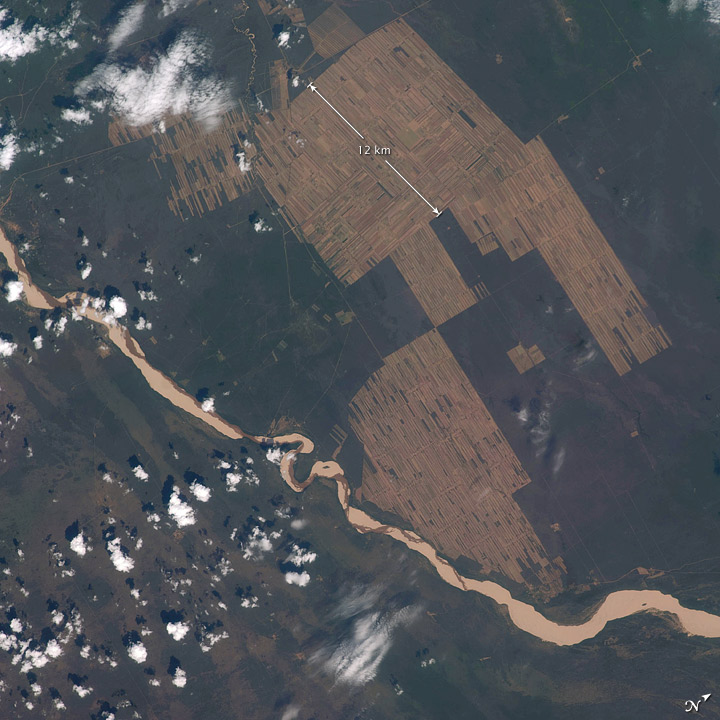 The eastern half of Bolivia is covered with tropical rainforest. In the 1990s, Bolivia initiated a large-scale effort to increase the rate of logging and create tracts of land for commercial agriculture (primarily soy and sugar cane, but also cocoa) on the Amazon Basin side of the Andean highlands. Today, the commercial fields are well established and easily mapped from space as large, rectangular clearings in the forest. The agricultural developments are still growing today. The clearings start off as small rectangles arranged perpendicular to an access road; early clearings take on a herringbone pattern when viewed from above. The intact areas (dark forest) are gradually logged and then cultivated, filling in the pattern to make a larger cleared area.

Astronauts aboard the International Space Station (ISS) routinely observe intensive land use and document their observations through imagery so that changes can be identified. These two photographs of the Bolivian forest along the Rio Parapetí in Bolivia (south of Santa Cruz, not shown) show different stages of the clearing process and agricultural field development. The top image, a wide panoramic view looking toward the west and the Andean foothills, was taken from the Space Shuttle in November 1995. The clearing efforts were just getting underway, evidenced by the crosshatched and herringbone pattern of clearing north of the river. On the south side of the river, old, abandoned stream channels show up as lighter regions with lesser forest cover.

The bottom view, a composite of two images taken from the ISS, provides a more detailed view of today’s landscape, showing completely cleared regions that stretch for more than 10 kilometers. For scale, the white line is about 12 kilometers (7.5 miles). The geographic area covered in the 2008 view is approximated on the top image by the white box.

Astronaut photographs STS73-E-5338 (top image) was acquired November 2, 1995, using the Kodak DCS460 electronic still camera (lens unknown). Photographs ISS018-E-8064 and ISS018-E-8065, merged together for the bottom image, were taken on November 9, 2008, using a Nikon D2Xs digital camera fitted with a 180 mm lens. These images are provided by the ISS Crew Earth Observations experiment and Image Science & Analysis Laboratory, Johnson Space Center. The bottom images were taken by the Expedition 18 crew. The image in this article has been cropped and enhanced to improve contrast. Lens artifacts have been removed. The International Space Station Program supports the laboratory to help astronauts take pictures of Earth that will be of the greatest value to scientists and the public, and to make those images freely available on the Internet. Additional images taken by astronauts and cosmonauts can be viewed at the NASA/JSC Gateway to Astronaut Photography of Earth. Caption by Cynthia Evans, NASA-JSC.

This photograph shows deforestation and agricultural development along Rio Parapetí in Bolivia between 1995 and 2008.