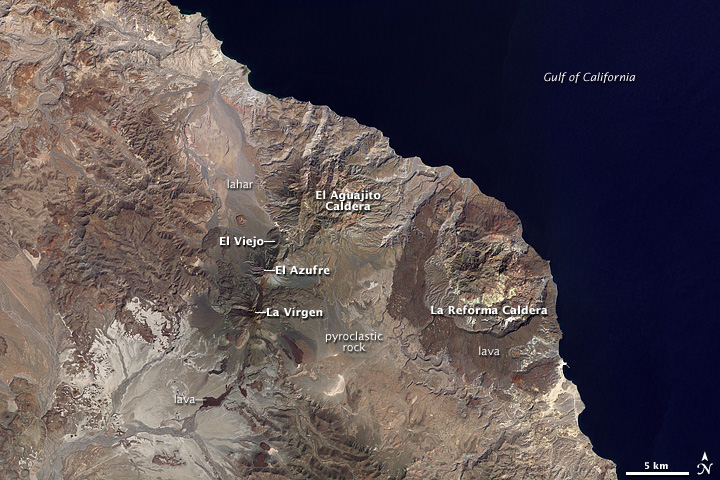 The arid climate of Baja California limits the amount of vegetation covering the ground and allows the dramatic volcanic features of the landscape to stand out in this natural-color image from the Landsat satellite on October 5, 2000. The landscape is a patchwork of lava flows and the hardened remains of pyroclastic flows—hot clouds of volcanic ash, dust, and rock fragments that race down the slopes of a volcano like an avalanche.

West of La Reforma is a line of three connected volcanoes. La Vírgen, in the southwest, El Azufre in the center, and El Viejo in the northeast. The volcanoes get larger and younger from northeast to southwest. As recently as 6,500 years ago, La Vírgen experienced a plinian eruption—a huge, explosive event that produces an enormous column of volcanic rock fragments and gas that reaches into the stratosphere. The eruption produced a column that reached at least 18 kilometers into the air and deposited ash and rock fragments over 500 square kilometers. In later stages of the eruption, pyroclastic flows (pinkish rocks) and lahars (mudflows, grayish rocks) from El Azufre Volcano paved the plain to the north all the way to the Gulf of California.

North-northeast of Las Tres Vírgenes is El Aguajito Caldera, where pyroclastic rocks and lava date to between 500,000-800,000 years old. The rim of caldera is not continuously exposed at the surface, but the rocks have a subtle circular arrangement. Like La Reforma, the northern rim of El Aguajito follows the coastline. The flat-looking rock formations, carved by arroyos, are lava domes, hardened mounds of slow-moving, sticky lava. The topography in the southern part of the caldera is more rugged and irregular. The rocks are a combination of pyroclastic deposits and a slightly more fluid lava than what erupted near the coast.