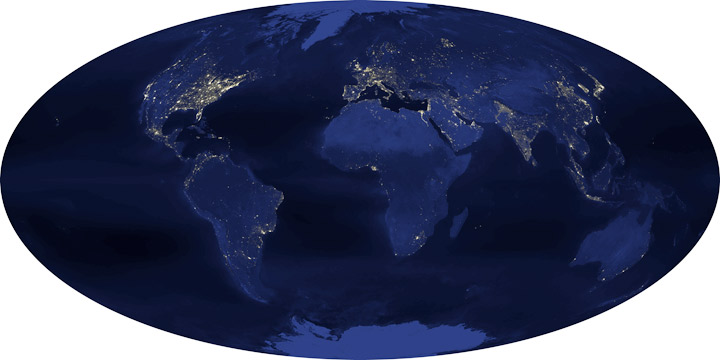 Throughout its 50-year history, NASA has studied our home planet as much as outer space. Over the decades, Earth-observing satellites have recorded the effects of seasonal changes, storms, droughts, tsunamis, volcanic eruptions, and earthquakes. Satellites have also shown us remote evidence of human activity, such as agriculture, urbanization, and other land-use changes. One of the most revealing aspects of human activity on Earth, however, is not apparent under the bright light of the Sun; it appears best in the dark of night.

This image shows Earth’s human-generated nighttime lights for the calendar year 2003, based on observations by the Defense Meteorological Satellite Program Operational Line Scanner. In this image, oceans appear black, landmasses appear in varying shades of blue, and lights appear yellow-white. Because these images focus on human impact, they do not include other (natural) light sources. Besides assembling cloud-free images, data visualizers carefully excluded sunlight, moonlight, and light from the Northern Hemisphere aurora.

The most intensely lit areas include the eastern half of the United States, southeastern Canada, Western Europe, Japan, and parts of Southeast Asia. Lights also line several coasts, including the western United States, Arabian Peninsula, and eastern Mediterranean. Additionally, patches of bright lights appear along the coasts of Australia, Brazil, Nigeria, and Cameroon. A flurry of lights delineates the Nile Delta.

In stark contrast to the well-lit coasts, hardly any lights adorn the interiors of the Sahara Desert, or the Congo and Amazon Rainforests. This distribution of city lights agrees with demographic studies concluding that coastal regions in temperate zones rank among Earth’s most populous areas, while interiors of deserts and rainforests rank among the least populous.

Observations collected at night shed light on the changing face of our planet. Marc Imhoff of NASA’s Goddard Space Flight Center counts nighttime light composites as his favorite satellite images, remarking that these images offer the best evidence of human impact on Earth. For this and other perspectives on NASA’s 50-year history of Earth observation, visit the Earth Observatory feature story Earth Perspectives.