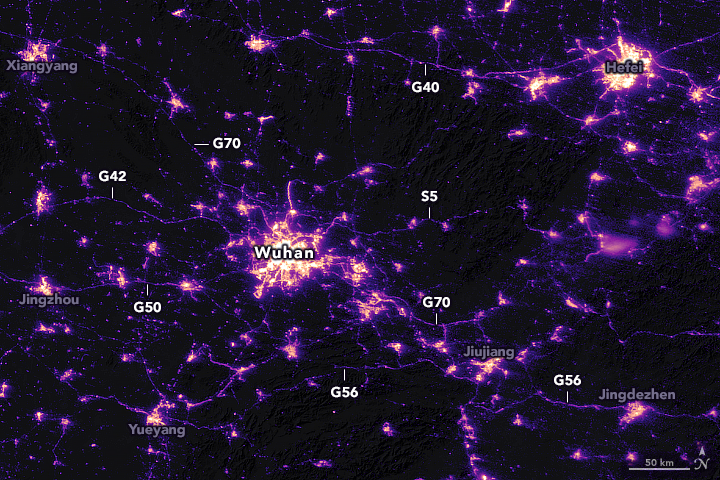 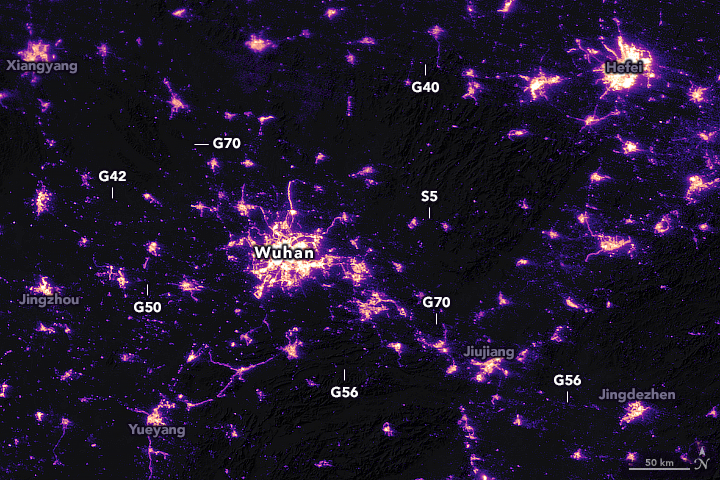 Beyond their beauty, images of Earth at night have a practical use. The nighttime lights of cities, highways, and other infrastructure are fingerprints of how civilization has spread across the planet. For some researchers, those lights not only speak to where we live, but how.

A team of scientists from NASA’s Goddard Space Flight Center (GSFC) and Universities Space Research Association (USRA) has detected signs of the recent shutdown of business and transportation around Hubei province in central China. As reported by the U.S. State Department, Chinese authorities suspended air, road, and rail travel in the area and placed restrictions on other activities in late January 2020 in response to the COVID-19 outbreak in the region.

A research team has been analyzing images of Earth at night to decipher patterns of energy use, transportation, migration, and other economic and social activities. The images on this page show changes in activity around the city of Wuhan, China, between January 19 and February 4, 2020. Labels marked with “G” or “S” indicate highways where there appeared to be a pronounced change.

The images were acquired before and after transportation networks and most business activities were shut down in the province of 60 million people. In the wide views above, note how highways and metropolitan areas grow dimmer after the lockdown. The detailed images below focus on lighting changes in Jianghan District, a commercial area of Wuhan, and nearby residential areas. 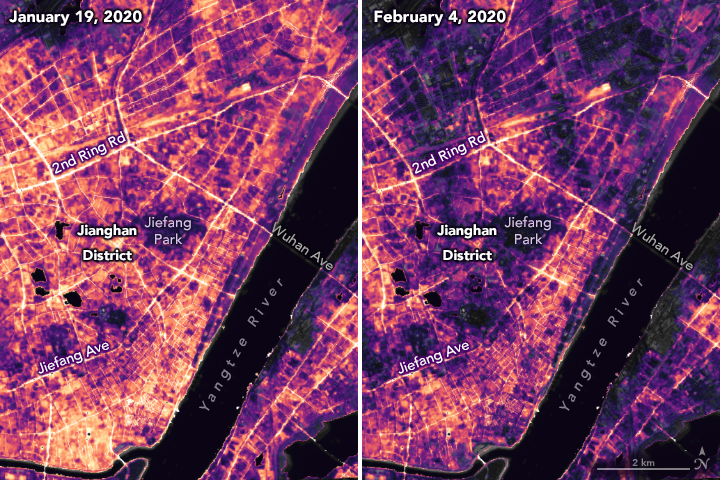 “The lights provide a different perspective on human settlements. We are not just looking at where the roads are; these images are telling us when and if the roads are being used. We are looking at human activities,” said Miguel Román, director of the Earth from Space Institute at USRA and a principal investigator of the “Black Marble” research team. For several years, the group has been building tools and techniques to gather a better, more consistent signal from nighttime images and then using them to examine human-driven patterns.

“We have been studying cities around the world and how they grow and change,” Román said. “Are they becoming more or less sustainable and livable? How do they consume energy? When, where, and how do people move and why? Night lights give context because urbanization is not just about a place; it is a socioeconomic, demographic, and land-use phenomenon.”

Data for the images were acquired with the Visible Infrared Imaging Radiometer Suite (VIIRS) on the NOAA–NASA Suomi NPP satellite (launched in 2011) and processed by GSFC and USRA scientists. VIIRS has a low-light sensor—the day/night band—that measures light emissions and reflections. This capability has made it possible to distinguish the intensity, types, and sources of lights and to observe how they change.

Precision is critical for studies with night lights. Raw, unprocessed images can be misleading because moonlight, clouds, pollution, snow cover, seasonal vegetation—even the position of the satellite—can change how light is reflected, distorting observations of human-made lights. The pairs of images on this page were acquired 16 nights apart, which is important because Suomi NPP observed the city from precisely the same angle on both nights. (The satellite repeats its orbital pattern every 16 days.) The research team also calibrated its measurements to account for changes in the landscape, atmosphere, and Moon phase. Fortunately, both nights were relatively cloud-free, which does not happen often over the planet’s middle latitudes.

“Black Marble imagery gives us a view of Earth that is human-centric,” said Eleanor Stokes, an urbanization and global change scientist at GSFC. “By monitoring these lights, we gain new insights about cities, their infrastructure development, and their growth patterns, but also about the pulse of human activities that make up urban life.” 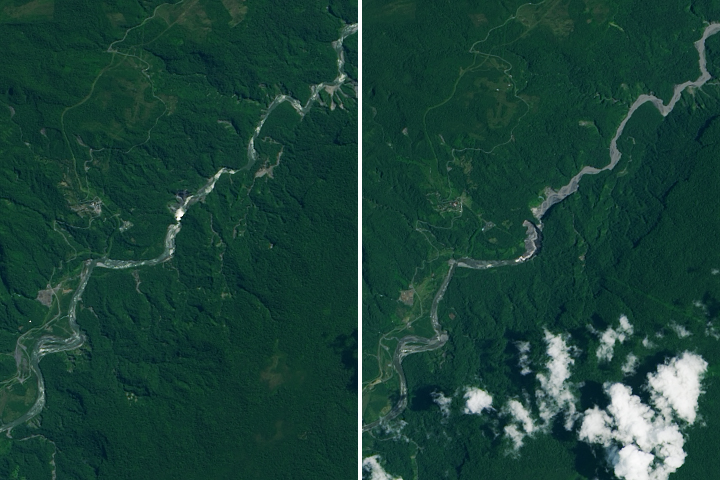