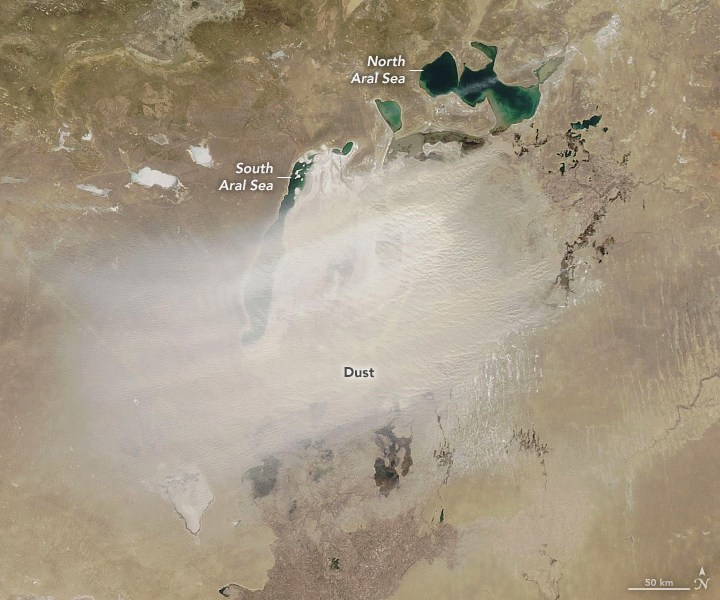 Spring has arrived in Central Asia. And over the Aral Sea, that means there is dust in the air.

On March 24, 2020, the Moderate Resolution Imaging Spectroradiometer (MODIS) on NASA’s Aqua satellite captured this natural-color image of a dust storm over the once-vast inland lake. Much of the dust appeared to be coming from the Aralkum Desert, which has emerged as the Aral Sea has dried in recent decades. Dried lake beds are abundant sources of atmospheric dust because they are filled with light, fine-grained sediment that winds can easily lift.

The Aral Sea has been shrinking since the 1960s, when the former Soviet Union undertook a major water diversion project on the arid plains of Kazakhstan, Uzbekistan, and Turkmenistan and diverted river water for crops that otherwise would have poured into the Aral Sea. As the lake dried, river runoff enriched the increasingly salty water with fertilizers and pesticides. As a result, the salty dust that blows from the exposed lake bed poses public health hazards and can degrade the fertility of soils in the surrounding area.


Scientists use satellites to track when and where winds transport the most dust. One analysis of nearly a decade of data from the NASA’s Aura satellite found that dust transport from the Aral Sea peaks in the spring (March-May) and early winter (November-January). In the spring, northeasterly and southwesterly winds often prevail, with 42 percent of dust plumes blowing to the north, 32 percent to the south, and 26 percent to the west.