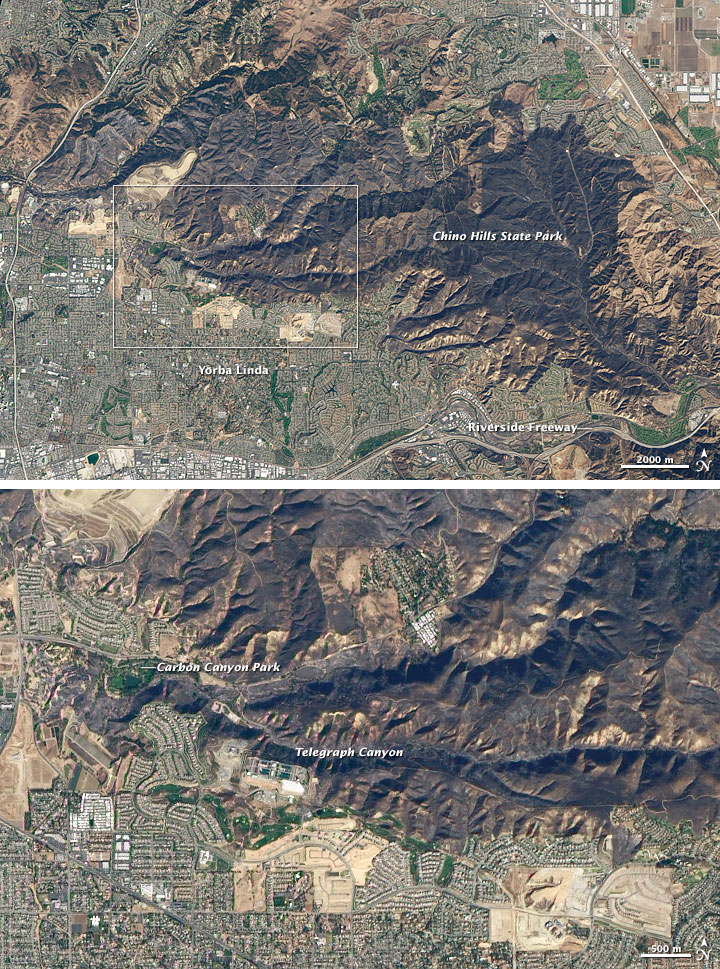 One hundred eighty-seven homes were destroyed by the Freeway Fire in Southern California in mid-November 2008. Driven by Santa Ana winds, the fire exploded out of the Chino Hills into communities at the foothills of the mountains. More than 30,000 acres were scorched by the fire.

This natural-color image of the burned area was captured by the Advanced Land Imager (ALI) on NASA’s Earth Observing-1 satellite on November 18, 2008. The top image shows the Chino Hills north of Riverside Freeway and west of Chino Valley Freeway, a mostly undeveloped area that encompasses Chino Hills State Park. Small cities and residential areas encircle the mountains. The burned area is charcoal, and it stretches across most of the Chino Hills. The lower image is a detailed view of the edge of the burned area in northwestern Yorba Linda. The fire crossed Telegraph Canyon and made forays southwestward into neighborhoods. One arm of the fire encircled Carbon Canyon Regional Park.

Southeast of the Riverside Freeway (shown in the large image), is a part of Chino Hills State Park called the Coal Canyon area. The area has a dull greenish-brown color that is typical for the dry woodland/chaparral ecosystems native to the area. (In this part of California, bright green vegetation is the product of irrigation, for example, golf courses and lawns.) The Coal Canyon area was added to China Hills State Park in 2000, and it was the only part of the ~14,000-acre park that was not burned, according to local news reports.

NASA image by Robert Simmon, based on data provided by the EO-1 Mission Office. Caption by Rebecca Lindsey.

This image shows the burn scar left by the Freeway Fire in the Chino Hills near Yorba Linda, California. 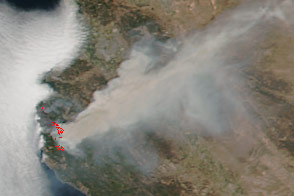