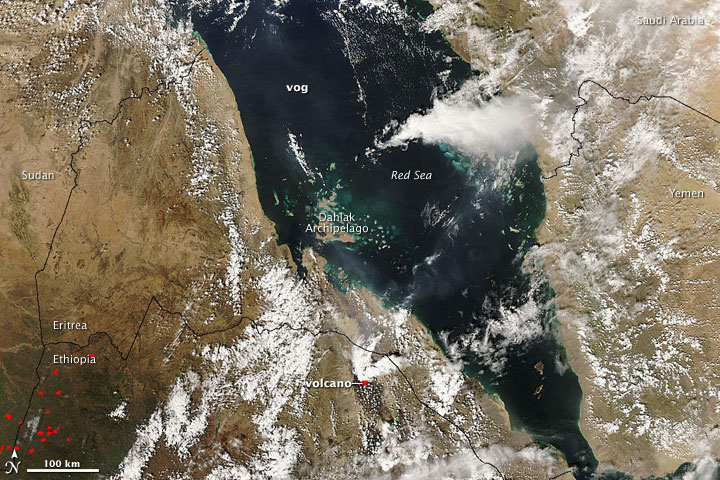 The Erta Ale Range is a volcanic chain in Ethiopia’s Afar Region, part of the East African Rift System where tectonic plates are pulling apart. In early November 2008, a volcanic eruption occurred in this region, producing an extensive lava flow.

The Moderate Resolution Imaging Spectroradiometer (MODIS) on NASA’s Aqua satellite captured this image of the volcano on November 4, 2008. The reported lava field is not apparent in this image, but a plume from the volcano does appear, as well as a faint cloud of vog blowing away from the volcano over the Red Sea. Vog, or volcanic smog, results when volcanic gases, including sulfur dioxide, mix with oxygen and water vapor in the presence of sunlight.

According to a news report on Volcano Live, the source of the eruption was likely a fissure between the Dalaffilla and Alu Volcanoes on the Erta Ale Range. This volcanic range derives its name from its most prominent feature, the Erta Ale Volcano. Erta Ale is a shield volcano with low, broad contours that resemble an ancient warrior shield. Spanning 50 kilometers (31 miles), it reaches a height of just over 600 meters (2,000 feet), and its base rests below sea level. 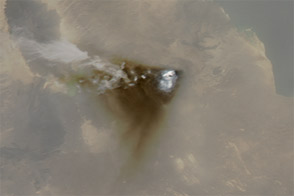