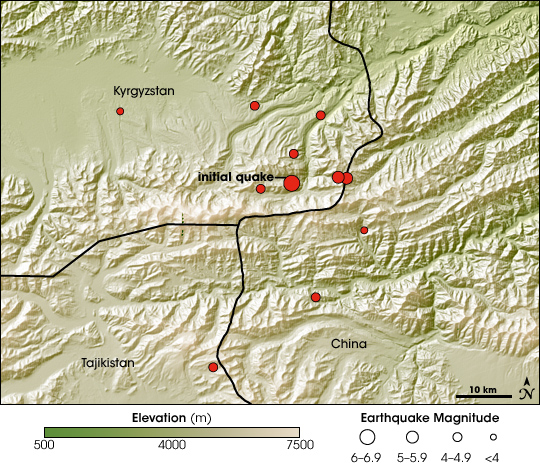 On October 5, 2008, at 9:52 p.m., a magnitude 6.6 earthquake shook eastern Kyrgyzstan. This image, made with elevation data from the Shuttle Radar Topography Mission, shows something of the basic geology behind the powerful quake. Kyrgyzstan is made up of steep mountains, with two peaks rising to an elevation greater than 7,000 meters (about 23,000 feet). The tectonic forces that created the rugged and breathtaking scenery also put the landlocked country at great risk for earthquakes.

The mountains formed as the Asian continent in the north folded under pressure in the ongoing collision with the Indian subcontinent to the south. As the landmass that contains India continues to move north, the Himalaya Mountains and the Tibetan Plateau rise by as much as a centimeter per year. In addition to adding elevation, the Tibetan Plateau also pushes north, and this motion is creating the mountains of Central Asia.

The process of mountain building continues, and earthquakes are an inevitable part of the process. Made up of mountains, Kyrgyzstan is frequently rattled by large earthquakes. The October 5 earthquake was centered in the Tien Shan Mountains near the Chinese border. Several moderate-sized aftershocks followed, and are represented on this map by red circles.

As of October 6, the full impact of the earthquake was still unknown, said the United Nations Office for the Coordination of Humanitarian Affairs (OCHA). The earthquake damaged the main road into the quake-hit region, making access for aid and damage assessment difficult. Sixty people died in the small village of Nura, which was nearly entirely destroyed, said OCHA. The Associated Press reported that the overall death toll had reached 74 by October 7.