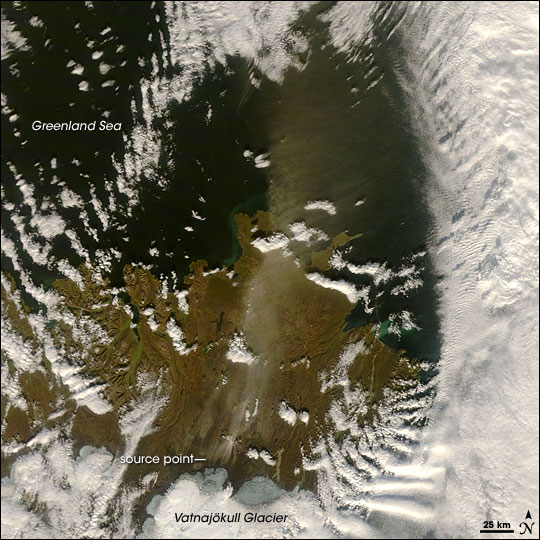 Dust storms usually call to mind vast sand seas along the equator, or dried up lakebeds in Central Asia, but such storms can also occur at much higher latitudes. On September 17, 2008, the Moderate Resolution Imaging Spectroradiometer (MODIS) on NASA’s Terra satellite captured this image of a dust storm blowing off the northern coast of Iceland.

In this natural-color image, the dust plume looks like a beige veil fluttering toward the north-northwest. The source points for the storm appear immediately north of the massive Vatnajökull Glacier. The source points’ closeness to the glacier makes sense because the massive weight of glaciers can grind rock into floury soil, or loess (rhymes with “bus”), which builds up at the sides and terminus of the glacier.

Although the skies over this part of Iceland were relatively clear at the time of the image, the winds whipping up this dust storm were a sign of approaching bad weather. According to reports from the Danish Meteorological Agency, the winds were linked to a strong low-pressure system located to the west of Iceland in the Denmark Strait off the southeast coast of Greenland. The storm harbored the remnants of Hurricane Ike.

In the Northern Hemisphere, winds spiral inward toward a low-pressure area in a counter-clockwise direction. Since the remnants of Hurricane Ike were west of Iceland near the time of this image, strong winds were sweeping in from the south, picking up the loess, and whisking it northward. (This graphic from the Danish Meteorological Agency shows the location of the low-pressure area with an “L” to the right of image center and the wind direction with red arrows). While stirring up this dust, the storm bearing the remnants of Ike was producing gale force winds in southeastern Greenland and churning up 9-meter (29.5-foot) swells in Denmark Strait.

According to the Danish Meteorological Agency, remnants of hurricanes and tropical storms only reach Iceland every two to four years. When Ike came ashore over the Gulf Coast of the United States, much of the moisture and energy of the storm were swept up by a weather system heading northeastward across the country. That system crossed the North Atlantic, bringing high winds, dangerous surf, and heavy rains to Greenland and Iceland.

Dust storms usually call to mind vast sand seas along the equator, or dried up lakebeds in Central Asia, but such storms can also occur at much higher latitudes. On September 17, 2008, The Terra satellite captured this image of a dust storm blowing off the northern coast of Iceland.