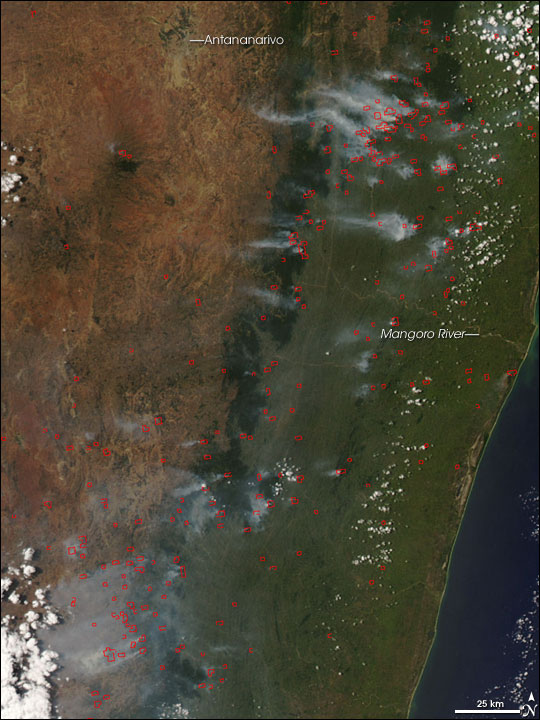 Dozens of smoky fires were burning in eastern Madagascar on October 19, 2008. The Moderate Resolution Imaging Spectroradiometer (MODIS) on NASA’s Aqua satellite captured this natural-color image of the island that afternoon. The image shows the mountainous areas around the capital city, Antananarivo. Locations where the sensor detected active fires are outlined in red.

The image shows the dramatic change in landscape from the coast to the island’s highland interior. Light green areas along the coastal plain are a mixture of forest and agricultural land. Dense forests appear deep green. The grassland and savanna ecosystems of the high plateau of the island’s interior appear in shades of dull green, tan, and reddish-brown.

Fires are scattered across the coastal plain, and several of the smokiest fires appear to be burning at the edges of or in densely forested areas. Some of these may be naturally occurring forest fires, but are more likely intentional land-clearing or accidental human-caused fires. As in Africa, people in Madagascar have used fire as a land-management tool for thousands of years. Although agricultural fires are not necessarily immediately hazardous, they can have a significant impact on climate, air quality, and plants and animals, particularly when they get out of control and penetrate natural areas.