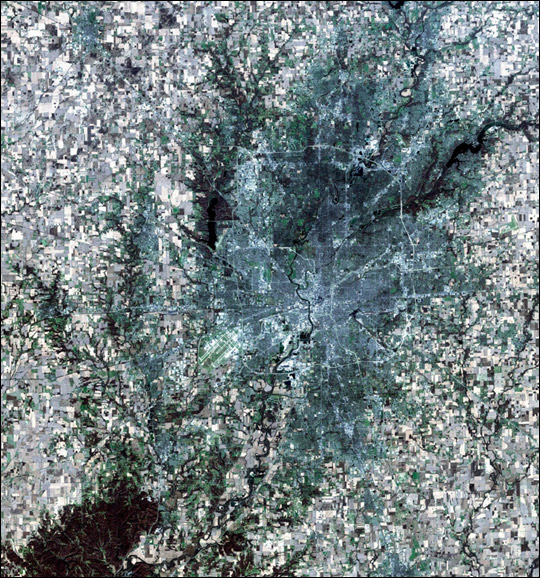 This Sunday (May 25, 2003), more than 350,000 race fans gathered at the Indianapolis Motor Speedway to watch 33 Formula One cars race at speeds of over 240 miles per hour around a 2.5-mile-long, oval track. The race, which is held at the Indianapolis Motor Speedway, is largest and oldest automobile race in the country, dating back to 1911. The drivers must complete 200 laps on the track to win a cash prize of over $1.4 million. (Congratulations to Gil de Ferran for winning his first-ever Indy 500.)

In the above image of Indianapolis, the speedway is located directly on the edge of the metropolitan area northeast of the city’s center and directly north of the airport. The city, which was first settled in 1820, is now home to 780,000 people and is the focal point of a metropolitan area inhabited by more than 1.6 million people. The White River can be seen wending its way north-south through the center of town.

This false-color Landsat 7 Enhanced Thematic Mapper plus (ETM+) image was acquired on November 16, 2002. The urban areas are grayish blue, water is black and forested areas are green and dark green. The patchwork of light green, beige, and light gray surrounding the city is farmland. In the lower lefthand corner of this scene, the dark brown feature with the “wrinkled” appearance hints at the hilly terrain that lies to the south. Unlike the flat prairies in the northern and central parts of Indiana that are ideal for farming, the southern part of the state is relatively more rugged.