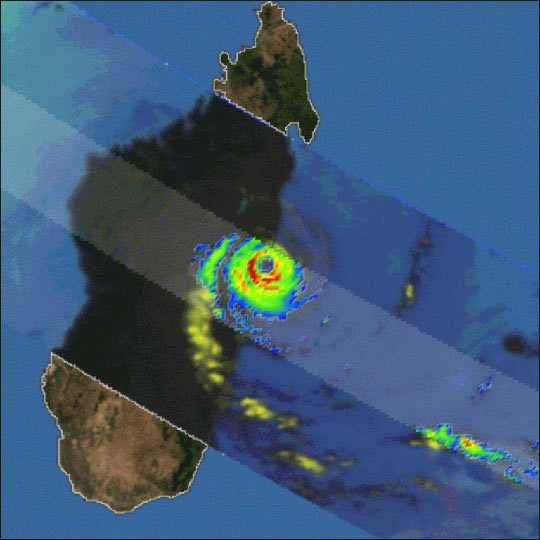 This image from the Tropical Rainfall Measuring Mission (TRMM) satellite on May 8, 2003, shows Tropical Cyclone Manou as it made landfall over Madagascar and moved slowly southward along the east coast. In this view, the path of the satellite cuts across Madagascar as a dark gray swath. The outermost part of the swath sweeps out the scanning path of the TRMM Microwave Imager, which detects ice particles in the top of Manou’s outer rain bands (shown in yellow). The innermost swath shows rain intensity as measured by the Precipitation Radar, with red colors indicating the heaviest rain rates, in excess of several inches per hour. Note the well-defined eye in the center of the storm and the intense rains in the surrounding eyewall.

With the core of Manou’s circulation moving along the coastline, vast amounts of rain are being deposited on the nation. The potential for serious flooding over this country is particularly high, as many of the steep mountain slopes are deforested and thus quite prone to runoff and mudslides. Madagascar, located in the Indian Ocean southeast of Africa, averages about four tropical cyclones each rainy season between November and April.

The TRMM satellite was jointly built by NASA and the Japanese space agency NASDA. Views of other 2003 and 2002 tropical cyclones can be found at the TRMM Website.

A late-season cyclone makes landfall over Madagascar on May 7 and 8, 2003.