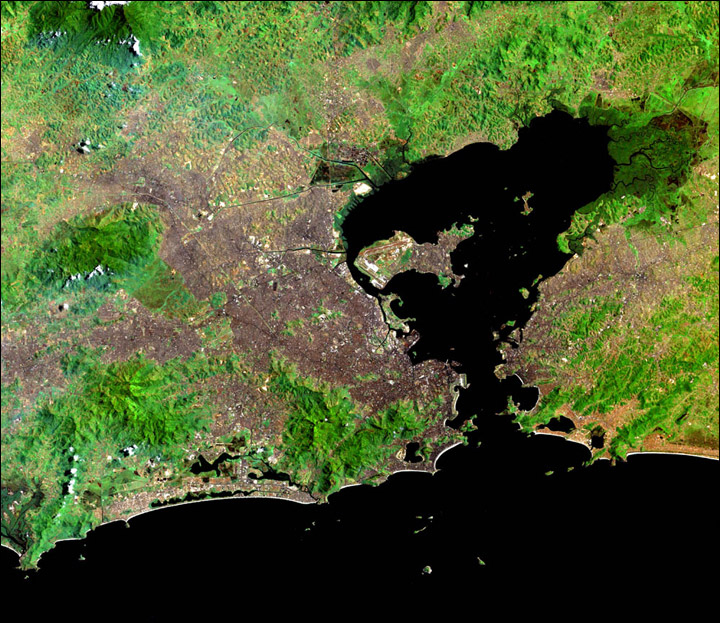 Located in southeastern Brazil, the city of Rio de Janeiro hugs the western shore of Guanabara Bay, which is right of center in this false-color image. Originally mistaken for the mouth of a great river by the Portuguese explorers who visited it for the first time in January of 1502, the area was subsequently called “Rio” for river, and “de Janeiro, ” for January. In the western portion of the Bay is Governor’s Island, where the city’s international airport is located; in the high-resolution image, the straight lines of the runways are easy to see.

Rio is bounded to the north by forested mountains and to the south by its world famous beaches, whose white sands stand out brightly against the blue-black waters of the Guanabara and the Atlantic Ocean. Perhaps the most famous are Copacabana (the first scallop of coastline on the western shore of Guanabara Bay) and Ipanema (to the west, fronting the Atlantic). Between the city and the beaches to the southwest is a large urban forest, Tijuca National Park, which is home to some of the last remnants of a fast-disappearing ecosystem known as Atlantic Rainforest, which once blanketed the east coast of Brazil.

More than 5 million people live in Rio de Janeiro, considered one of the world’s most beautiful cities, and thousands more visit each year, especially during late February and early March for the Carnaval Festival that precedes the forty days approaching Easter.

This image was acquired by the Landsat 7 Enhanced Thematic Mapper plus (ETM+) on February 28, 2002. It is a false-color scene made using a combination of ETM+ bands 2, 1, and 7.

A Merging of Pale and Dark