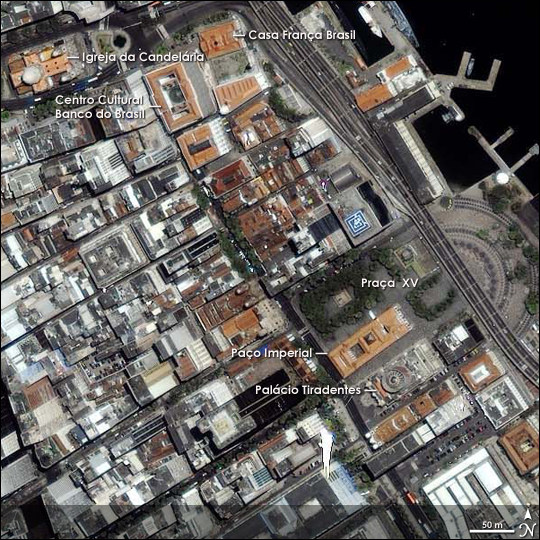 Located on the Guanabara Bay in southern Brazil, Rio de Janeiro is one of the most densely populated cities in the world and is also considered one of the most beautiful cities in the world. Rio de Janeiro has been nicknamed Cidade Maravilhosa—Marvelous City—for its sandy beaches, steep mountains, tropical forest, and bay-side location. It is also the only city outside of Europe to have served as a European capital: Portugal’s king and ruling officials moved their government from Lisbon to Rio de Janeiro to escape Napoleon in 1808. The city was the center of Brazilian government until the capital shifted to Brasília in 1960. This image, taken by the Ikonos satellite, shows Praça XV, the square where Portugal’s ruling family first resided, where Brazil declared its independence in 1822, and where Brazil was declared a republic in 1889. Also visible in the image are several churches and cultural centers in the heart of Rio’s historic Centro (Center) district.

The tree-lined Praça XV is right of the center of the image. On the south side of the square is the Paço Imperial, Imperial Palace, a building that served as a home to the royal family, and then a government building, and is now a cultural center. Below it is the grey-domed Palácio Tiradentes, built in 1926 to house the Brazilian Congress. Northwest of Praça XV is one of Rio’s oldest and largest churches, Igreja da Candelária. Its limestone dome rises in the center of a cross-shaped pink roof. Nearby are the Casa França Brasil and Centro Cultural Banco do Brasil. Formerly a customs house and a commerce and bank center, respectively, both are now cultural centers.