A Merging of Pale and Dark 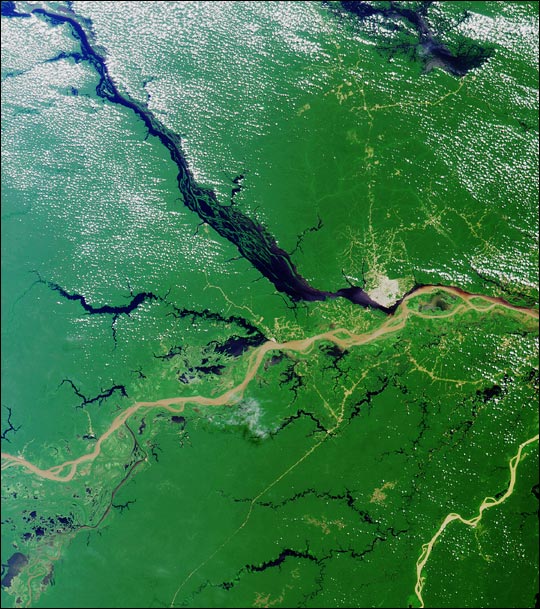 Close to the city of Manaus, Brazil the Rio Solimoes and the Rio Negro converge to form the Amazon River. This image from the Multi-angle Imaging Spectro Radiometer’s (MISR’s) vertical-viewing (nadir) camera was acquired on July 23, 2000. Manaus is the gray patch to the right of image center.

The pale, murky color of the Rio Solimoes heralds its burden of glacial silt and sand, which results from its origin in the Peruvian Andes mountains. The dark color of the Rio Negro is characteristic of clear waters that originate in areas of basement rock and carry little sediment. East of Manaus the pale and dark waters flow side-by-side as distinct flows before they eventually merge.

Northwest of Manaus on the Rio Negro is the Anavilhanas Archipelago, the largest group of freshwater islands in the world and a wildlife reserve. At the top of the image, a portion of the dark-colored Uatuma River is visible. In the lower right is the very light-colored Rio Madeira, formed from mountain streams originating near the Brazil-Bolivia border. Madeira is Portuguese for wood, and the river is named for the large amount of driftwood that floats on its waters.