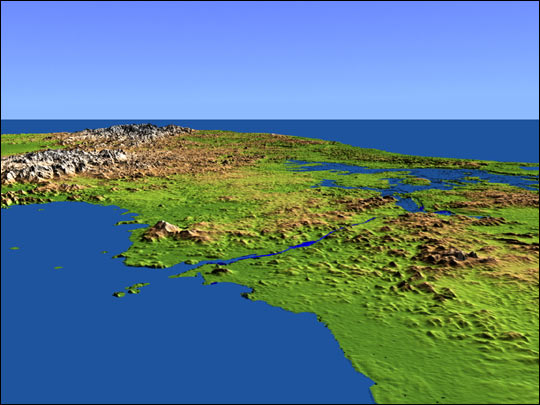 This perspective view shows the Panama Canal with the Gulf of Panama in the foreground and the Caribbean Sea in the distance. The canal runs northwest-southeast from the city of Colon on the Atlantic side to Panama City on the Pacific side. Water levels are maintained along its length by three reservoirs, the largest of which is Lake Gatun, visible at the right center of the image. Built by the U.S. Army Corps of Engineers between 1904 and 1914, the canal extends for approximately 50 miles, and is widely considered to be one of the world’s great engineering achievements.

This shaded relief perspective view was generated using topographic data from the Shuttle Radar Topography Mission (SRTM). A computer-generated artificial light source illuminates the elevation data to produce a pattern of light and shadows. Slopes facing the light appear bright, while those facing away are shaded. On flatter surfaces, the pattern of light and shadows can reveal subtle features in the terrain. Colors show the elevation as measured by SRTM, and range from green at the lowest elevations to white at the highest elevations.