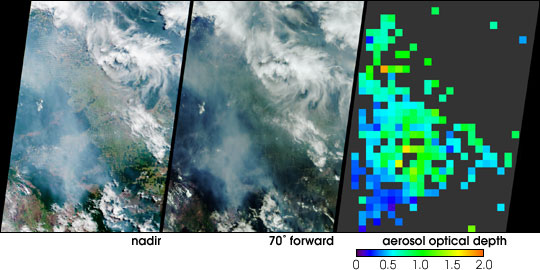 In the Brazilian state of Rondonia, scientists have gathered to study gases and airborne particles produced in the tropics. Between September and November 2002, they are conducting integrated airborne and ground-based measurements aimed at better understanding the role these constituents play in Earth’s climate. These views from the Multi-angle Imaging SpectroRadiometer (MISR) show extensive plumes of fine particles emanating from burning vegetation within Rondonia. The data were acquired on September 15, the official start date for the Amazon burning season, and one week into the field study, which is called the Cooperative Large-scale-biosphere-atmosphere Airborne Regional Experiment, or CLAIRE.

The left-hand panel is a natural-color view acquired by MISR’s vertical-viewing (nadir) camera. The center image covers the same geographic area, as seen by the 70-degree forward-viewing MISR camera. The appearance of smoke and haze is enhanced in the oblique view, whereas the herringbone patterns of deforestation are more evident in the nadir image. Due to geometric parallax, clouds appear to move relative to the ground between these two images. At right is a map of aerosol optical depth, a measure of the amount of particulates in the atmosphere, derived from the MISR multi-angle views. Haze distributed across Rondonia shows up as light blue and green pixels across the region. Places where clouds or other factors precluded an aerosol retrieval are shown in dark grey.

The main measurement site for the CLAIRE campaign is a field near the town of Ji-Parana, somewhat below and to the right of the MISR image centers. It is well-situated to observe the thick palls of smoke originating in dense vegetation to the south and east, at the eastern end of the Parque Nacional de Pacaas Novos. The CLAIRE aircraft will follow these plumes as they spread over the region, and will measure the changing characteristics of the smoke particles as they age. The southern edges of these images extend into Bolivia, where more fires are burning near the Brazil-Bolivia border. Clearer skies in the southeast corner of the image area are associated with higher-elevation lands along the Serra dos Parecis mountains.

The Multi-angle Imaging SpectroRadiometer observes the daylit Earth continuously from pole to pole, and every 9 days views the entire globe between 82 degrees north and 82 degrees south latitude. The MISR Browse Image Viewer provides access to low-resolution true-color versions of these images. These data products were generated from a portion of the imagery acquired during Terra orbit 14595. The panels cover an area of about 400 kilometers x 563 kilometers, and utilize data from blocks 98 to 101 within World Reference System-2 path 231.

Further information about the CLAIRE campaign, and the Large-scale-Biosphere-Atmosphere (LBA) study program may be found at: LBA-CLAIRE and the LBA page at Oak Ridge National Laboratory.