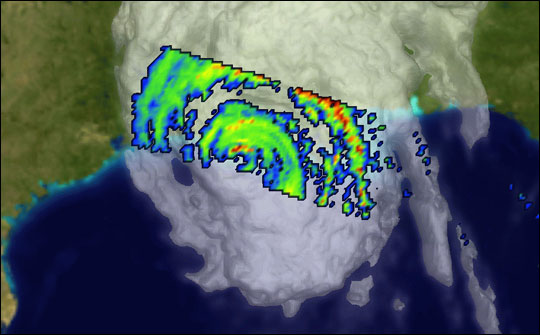 Between 9 and 10 am this morning, the center of Hurricane Lili moved onshore across the western side of Vermillion Bay, Louisiana. Yesterday afternoon, Lili quickly became a forecaster's worst nightmare as the storm began to rapidly intensify, quickly peaking as a Category 4 storm around midnight. But just as suddenly, the storm's intensity decreased during the early morning hours less than 100 miles offshore, weakening to a Category 2 storm just before landfall.

NASA and NASDA's Tropical Rainfall Measurement Mission (TRMM) satellite measures rainfall hidden inside the clouds. This timely TRMM overpass captured the storm during the very moment of landfall. A complex pattern of rainbands is clearly revealed. Blue tones reveal light rain, moderate intensity rain is shown in green, and reds show the heaviest rains. TRMM shows that the eyewall had fragmented just prior to landfall, but torrential rains in the northern eyewall (shaded red) were working their way onshore.

These new GOES 8 images of Hurricane Lili show the storm shortly after the eye made landfall in Louisiana.