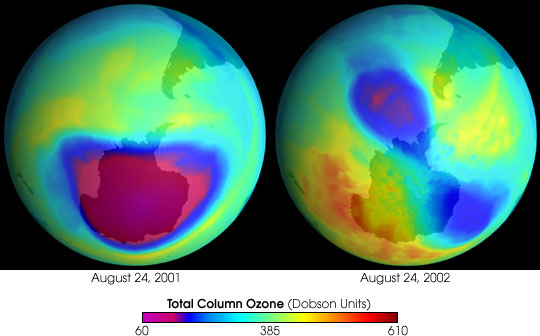 Scientists from NASA and the National Oceanic and Atmospheric Administration (NOAA) have confirmed the ozone hole over the Antarctic this September is not only much smaller than it was in 2000 and 2001, but has split into two separate “holes.”

The researchers stressed the smaller hole is due to this year’s peculiar stratospheric weather patterns and that a single year’s unusual pattern does not make a long-term trend. Moreover, they said, the data are not conclusive that the ozone layer is recovering.

Paul Newman, a lead ozone researcher at NASA’s Goddard Space Flight Center, Greenbelt, Md., said this year, warmer-than-normal temperatures around the edge of the polar vortex that forms annually in the stratosphere over Antarctica are responsible for the smaller ozone loss.

Estimates for the last two weeks of the size of the Antarctic Ozone Hole (the region with total column ozone below 220 Dobson Units), from the NASA Earth Probe Total Ozone Mapping Spectrometer (EPTOMS) and the NOAA-16 Solar Backscatter Ultraviolet instrument (SBUV/2), are around 15 million square kilometers (6 million square miles). These values are well below the more-than 24 million sq. km. (9 million sq. mi.) seen the last six years for the same time of year.

On September 24, 2002, the Antarctic ozone hole split into two holes for the first time since satellite measurements have been taken. In the image above, based on data acquired by EPTOMS, Dark blue and violet colors indicate the hole, an area with at least 20% less ozone than normal.

This image shows the latest data from the Total Ozone Mapping Spectrometer (TOMS) Earth Probe, for the month of October 1999.