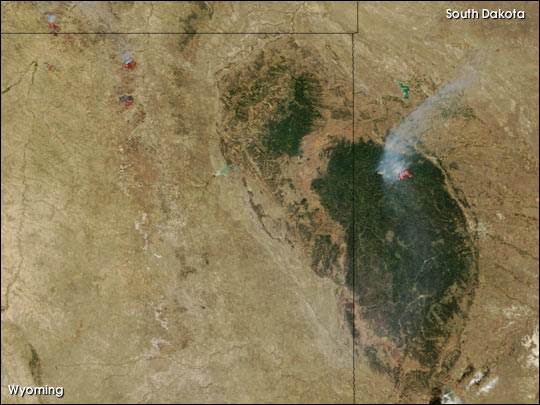 As the Rodeo/Chedeski fire in Arizona slowly comes under control, additional fires are springing up in the Rocky Mountain states. The Grizzly Gulch fire (right) is near the town of Deadwood, South Dakota, in the Black Hills. Officials have evacuated Deadwood and neighboring communities. The Pownell and Daley complex fires are burning in nearby Wyoming (left) and the Line Creek fire is just above those in Montana.

So far this year, 2,817,641 acres have burned in the U.S., more than twice the ten-year average of 1,102,452 acres for the months of January through June. By July 1st of 2000, a record-breaking fire year, only 1,712,945 acres had burned. The rainy monsoon season is likely to begin soon in the southwest, where the largest fires have been, but the fire season further north peaks later in the summer.

This image was taken by the Moderate Resolution Imaging Spectroradiometer on June 30, 2002.