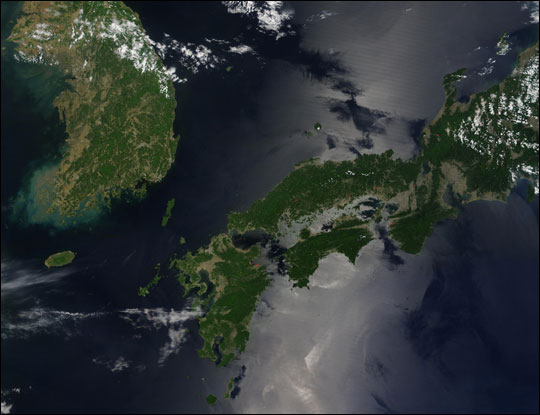 From May 31 to June 30 the biggest single-sport event in the world, the 2002 FIFA World Cup (tm), will be taking place in Asia. South Korea and Japan are acting as hosts for the event which is being held in Asia for the first time. This true-color image of the southern Korean peninsula and southern Japan was acquired on May 25, 2002, by the Moderate-resolution Imaging Spectroradiometer (MODIS), flying aboard NASA’s Terra satellite.

Thirty-two nations are represented at this year’s Finals including the 1998 champion France, European powers England and Italy, tournament favorite Argentina, and the United States. The finals are the culmination of a 2-year qualifying process which started with 132 nations competing in regional qualification tournaments. In the round-robin first round of the World Cup, the U.S. team will be competing against teams from Portugal, Poland, and South Korea.