Twin Cyclones Result From Shift in the Trade Winds 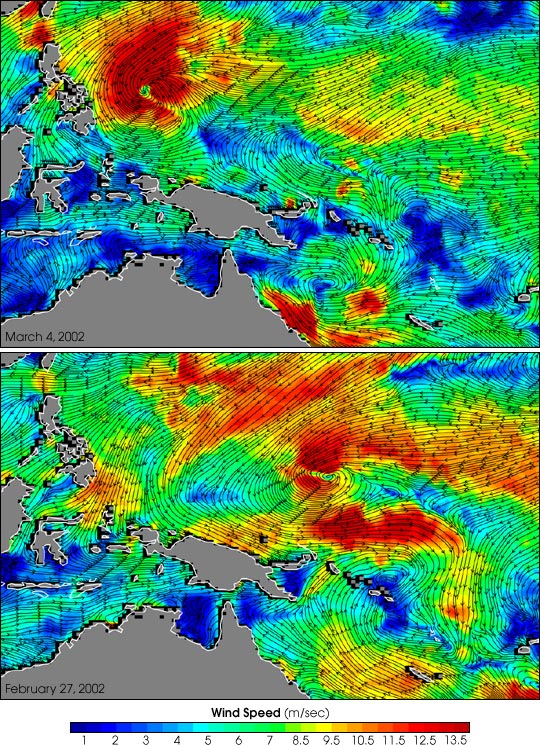 QuikSCAT, a NASA satellite instrument that measures winds, observed a strong typhoon threatening the Philippines on March 4, 2002, (top) unusual in the winter season, and a similar tropical cyclone passing along the Australian coast towards Nuomea. These unusual phenomena are results of the westerly winds (blowing from Indonesia towards the American coast) along the equator which started back in February 25, (lower) as QuikSCAT revealed. Color in these images relates to wind speed, arrows indicate direction.

The reversal of the usual Trade Winds (which blow from the American coast towards Asia) generally triggers Kelvin waves (warm surface water that moves along the equator from Indonesia to the coast of Peru) and twin cyclones, which are early indicators of El Niño. The equatorial westerly winds generate a counter-clockwise vortex in the Northern Hemisphere and a clockwise vortex in the Southern Hemisphere. The Trade Winds push warm water from east to west across the Pacific, reaching the American coast in one to two months. The increase in frequency and strength of the Kelvin Waves may lead to El Niño. Strong westerly winds and twin cyclones were also observed by QuikSCAT during last Christmas season (2001) and the Kelvin wave triggered at that time reached South America in Early March 2002.

The Winds of Hurricane Florence