Monitoring the Spread of West Nile Virus with Satellite Data 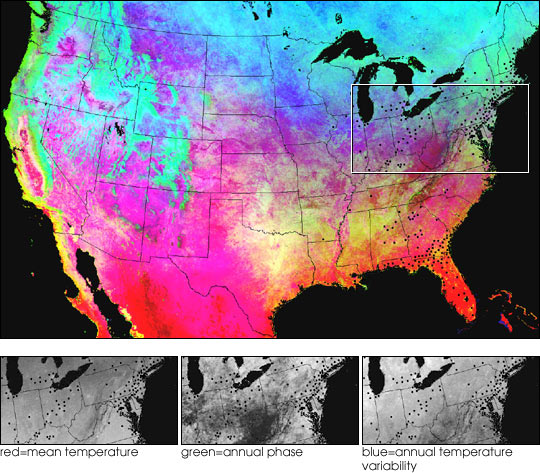 A NASA-funded study uses temperature and vegetation data from satellites to help track and predict where West Nile virus is spreading in North America. Scientists and public health officials hope one day to use near real-time maps to focus resources and stave off the disease more efficiently.

This image is a composite of land surface temperatures (LST) recorded between 1997 and 2000 and was used to help monitor and predict the spread of West Nile virus in the United States.

In the color figure above, the mean land surface temperatures are in red; annual amplitude—or the difference between low and high annual temperatures—is in blue; and annual phase—or the timing of annual temperature peaks—appears in green. Brighter colors mean higher values. The major north-south temperature difference (dull red in the upper part of the image to bright red in the lower part) is considerably affected by the Rockies in the west and to a much lesser extent by the Appalachians in the east. The brighter blue in the upper part of the image indicates the big difference between highest and lowest temperatures during the course of a year at higher latitudes. There is less variation in the timing of the annual peak of land surface temperatures, which occurs earlier in the south than in the north.

Black dots superimposed on this image are the locations (county geo-centers) where birds infected with West Nile virus were reported between January and October 2001.

Scientists working with the International Research Partnership for Infectious Diseases (INTREPID) program based at NASA are using such imagery to define and predict the conditions where mosquitoes transmit West Nile virus in the U.S.

The conclusion reached about the importance of any single variable depends both upon its value and context. A temperature of 30° Celsius (86° Fahrenheit) might be fatal for a mosquito at low humidity but survivable at higher humidities. The work done here on West Nile virus and other diseases shows very clearly that it is a unique combination of temperature, humidity, and vegetation variables that tends to determine mosquito and disease presence and abundance.