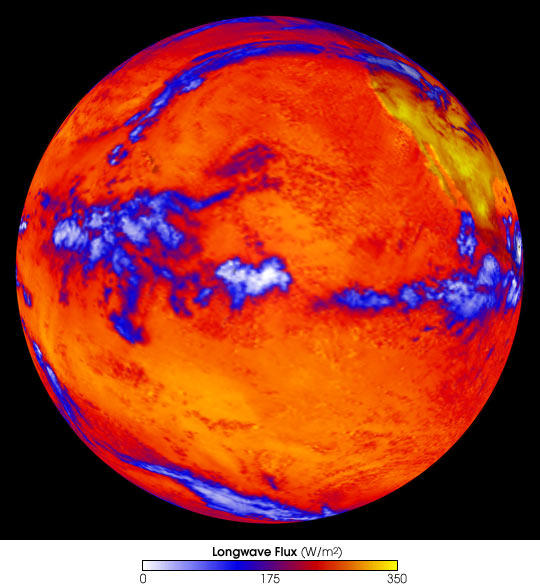 Absorption of solar energy heats up our planet’s surface and the atmosphere and makes life for us possible. But the energy cannot stay bound up in the Earth’s environment forever. If it did then the Earth would be as hot as the Sun. Instead, as the surface and the atmosphere warm, they emit thermal longwave radiation, some of which escapes into space and allows the Earth to cool. This false-color image of the Earth was produced on September 30, 2001, by the Clouds and the Earth’s Radiant Energy System (CERES) instrument flying aboard NASA’s Terra spacecraft. The image shows where more or less heat, in the form of longwave radiation, is emanating from the top of Earth’s atmosphere.

As one can see in the image, the thermal radiation leaving the oceans is fairly uniform. The blue swaths across the central Pacific represent thick clouds, the tops of which are so high they are among the coldest places on Earth. In the American Southwest, which can be seen in the upper righthand corner of the globe, there is often little cloud cover to block outgoing radiation and relatively little water to absorb solar energy. Consequently, the amount of outgoing radiation in the American Southwest exceeds that of the oceans. Also, that region was experiencing an extreme heatwave when these data were acquired.

Recently, NASA researchers discovered that incoming solar radiation and outgoing thermal radiation increased in the tropics from the 1980s to the 1990s. (Click to read the press release.) They believe that the reason for the unexpected increase has to do with an apparent change in circulation patterns around the globe, which effectively reduced the amount of water vapor and cloud cover in the upper reaches of the atmosphere. Without the clouds, more sunlight was allowed to enter the tropical zones and more thermal energy was allowed to leave. The findings may have big implications for climate change and future global warming.

“This suggests that the tropical heat engine increased its speed,” observes Dr. Bruce Wielicki, of NASA Langley Research Center. “It’s as if the heat engine in the tropics has become less efficient, using more fuel in the 1990s than in the 1980s.”