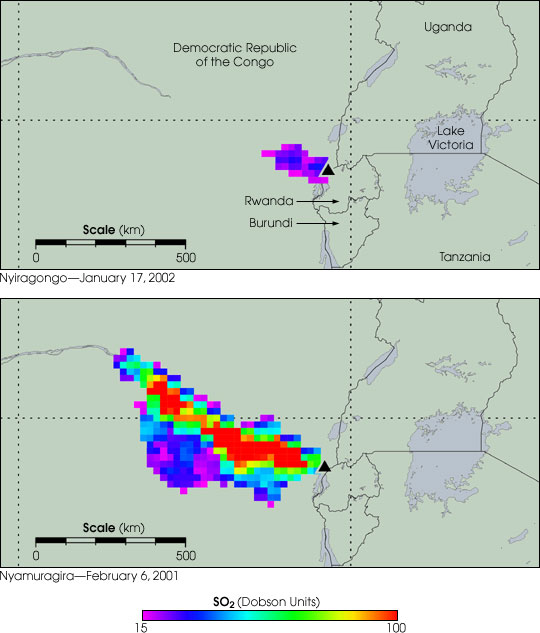 The Earth Probe Total Ozone Mapping Spectrometer (TOMS) detected a sulfur dioxide cloud associated with the January 2002 eruption of Nyiragongo as it flew over the region at around 11 a.m. local time (0900 UTC) on January 17. The sensor detected no significant amounts of ash in the eruption cloud. At the time of the TOMS overpass the cloud extended up to roughly 200 km (124 miles) northwest of Nyiragongo and was still attached to the volcano. This observation is consistent with nearly coincident MODIS imagery which shows an opaque cloud of gas and steam in the same location. The TOMS measurements show that the amount of sulfur dioxide in the Nyiragongo’s plume range from about 10 to 30 kilotons.

Please note that TOMS mass retrievals are dependent on the altitude of the cloud and may be adjusted as more information becomes available. Since the cloud may still have been developing at the time of the TOMS overpass, the final sulfur dioxide burden may have been greater. Wind trajectory data (courtesy of Leslie Lait, SSAI) suggest that part of the cloud may have reached at least mid- to upper-tropospheric altitudes of up to 12 km (7 miles), but scientists suspect no significant stratospheric injection of sulfur dioxide as a result of this eruption since the gas was not visible over the Democratic Republic of the Congo region in subsequent TOMS data acquired on January 18.

Production of sulfur dioxide without a significant ash cloud is commonly observed during effusive eruptions such as the Nyiragongo event. Although dense low-level ash may be produced during such eruptions, these particulates usually fall out fairly quickly and elude detection by satellite. The size of the January 17 Nyiragongo cloud and the estimated sulfur dioxide tonnage are fairly modest, and at least an order of magnitude smaller than values typically measured by TOMS during eruptions of nearby Nyamuragira during its frequent outbursts (e.g., on February 6, 2001). Sulfur dioxide column amounts (measured in Dobson Units) are much higher in the more extensive Nyamuragira cloud, which contained roughly 420 kilotons of sulfur dioxide. Although several factors could affect the size of the observed cloud in each case—such as the delay between the onset of the eruption and the TOMS overpass, and the volume of lava emitted and the lava composition—the TOMS data suggest that the Nyiragongo magma may have been largely degassed before eruption. One possible mechanism by which this could be achieved is the cyclic degassing of magma in the subaerial lava lakes that have been intermittently present in Nyiragongo’s summit crater over the past few decades.