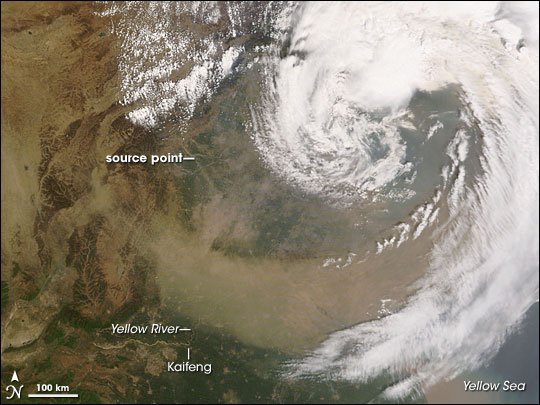 Dust and clouds formed a giant swirl over eastern China in late April 2008. The Moderate Resolution Imaging Spectroradiometer (MODIS) on NASA’s Terra satellite took this picture on April 25, 2008. This image shows the tan dust plume blowing from the west in a counter-clockwise direction. Southwest of the dust plume, the Yellow River is visible, although dust and clouds obscure the view of Bo Hai, into which the river empties. The clear skies that allow a glimpse of the river also reveal some source points for the dust storm in the west. The clouds that mix with the dust in the east are no coincidence; the same weather pattern associated with the clouds likely stirred the dust storm.