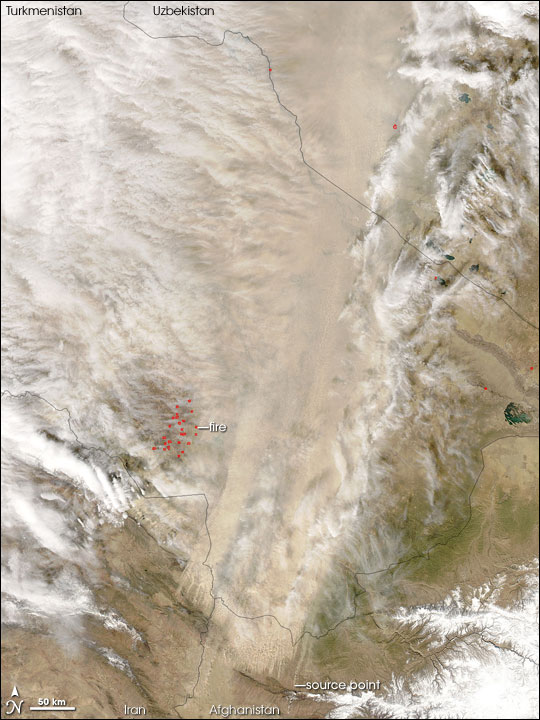 On January 29, 2007, a dust storm blew northward across Turkmenistan toward Uzbekistan. The Moderate Resolution Imaging Spectroradiometer (MODIS) on NASA’s Aqua satellite took this picture the same day. This image shows multiple sources for the dust in both Iran and Afghanistan. As sand covers much of Turkmenistan, however, dust could also have been picked up there, and just been hidden under the plume.

Mixed with the dust plume are clouds, which fringe it on both the east and west. The clouds could be associated with the same weather system that kicked up the dust. Smoke probably also mixes with the dust plume in this picture, as MODIS detected a cluster of hotspots (outlined in red) in southern Turkmenistan, along with a few more along the Uzbekistan border. These hotspots show where the satellite detected anomalously warm surface temperatures, usually associated with fires.

In the south, where skies are fairly clear of dust and clouds, patches of pale green appear along the Turkmenistan-Afghanistan border. Otherwise, vegetation is scarce in this arid region.