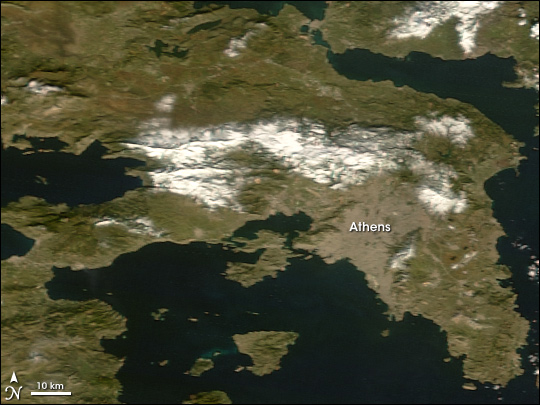 An unusual storm dumped snow on Athens, Greece, on January 29, 2008, reported Reuters. Snow still covered the mountains north of the city when the Moderate Resolution Imaging Spectroradiometer (MODIS) on NASA’s Terra satellite captured this image the following morning. The city of Athens, cement gray against the pale olive green of the surrounding landscape, appeared to be snow-free except for the northern fringes. Athens was not the only Greek city to experience a wintry blast of snow and wind on January 29, said Reuters, and this, too, is reflected in the image. Mountains throughout Greece are coated with snow in the large image. According to the Greek National Tourism Organization, snow is not unusual in the mountains of Greece during the winter.

You can download a 250-meter-resolution KMZ file of the snow in Greece suitable for use with Google Earth.