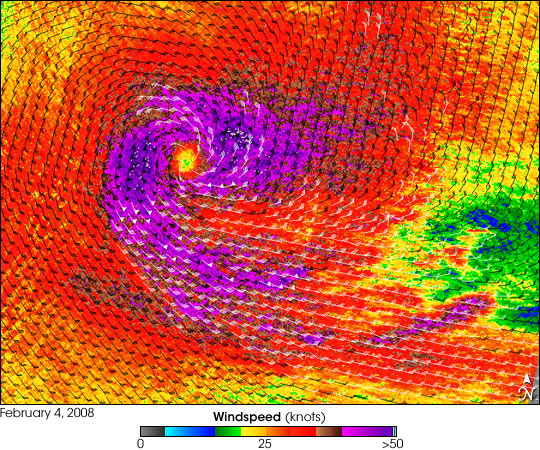 Even though Cyclone Gene was winding down when the QuikSCAT satellite observed it on February 4, 2008, the storm still exhibited the classic wind structure of a well-formed cyclone. A wide area of red indicates moderately strong winds throughout most of the storm. Bands of stronger winds, depicted in purple, circle a calm eye. The barbs, which indicate wind direction, show that winds were circling the eye. White barbs point to areas of heavy rain. Shortly after QuikSCAT acquired this data at 5:55 p.m., local time, the Joint Typhoon Warning Center estimated the storm’s sustained winds to be 45 knots (83 kilometers per hour or 52 miles per hour).

QuikSCAT measures a storm’s wind speed and direction using a scatterometer, a device that sends pulses of microwave energy through the atmosphere to the ocean surface and measures the energy that bounces back from the wind-roughened surface. The energy of the microwave pulses changes depending on wind speed and direction, giving scientists a way to monitor wind around the world. This technique does not work over land, but allows measurements in storms over oceans.