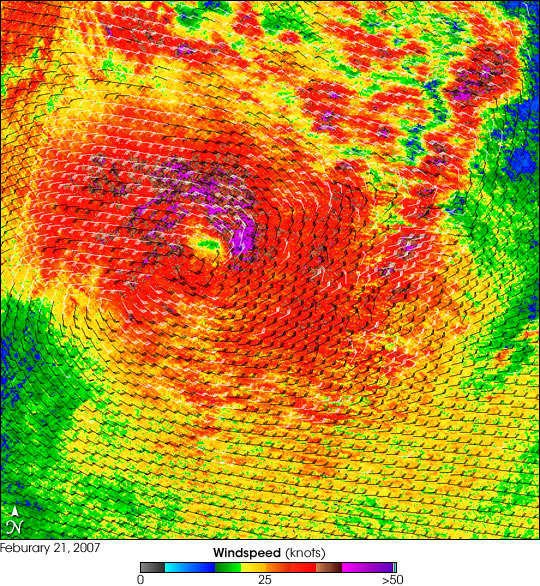 Tropical Cyclone Gamede was spinning in the middle of the Indian Ocean on February 21, 2007, when it was observed by NASA’s QuikSCAT satellite at 5:03 p.m. local time (13:03 UTC). The nearest land to the storm system was Diego Garcia, several hundred miles north of the storm.

This data visualization of QuikSCAT’s observations shows Cyclone Gamede and its spiral pattern of winds. The image depicts wind speed in color and wind direction with small barbs. White barbs point to areas of heavy rain. Gamede appears as a well-formed spiral of winds centered around a strong eye with a calmer center. This pattern is typical of tropical cyclones. Since the storm is in the Southern Hemisphere, the Coriolos force, which gives all such storms their spin, turns the storm clockwise, the opposite direction of hurricanes and typhoons that form in the Northern Hemisphere. According to the University of Hawaii’s Tropical Storm Information Center, Cyclone Gamede had sustained winds around 45 knots (83 kilometers per hour; 52 miles per hour) at the time of the QuikSCAT observations.