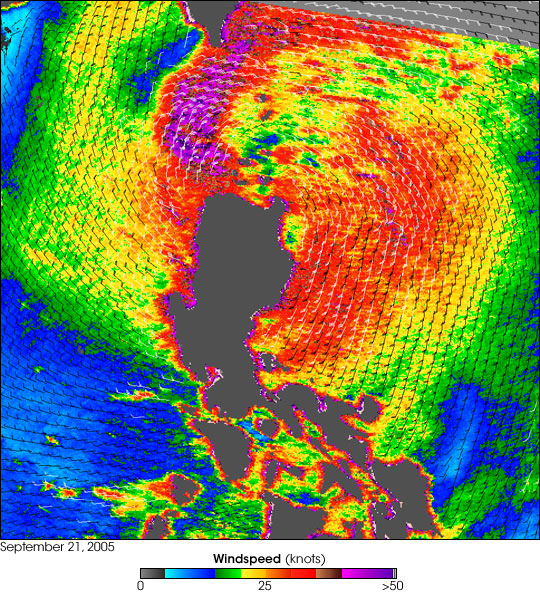 Tropical Storm Damrey is shown here as observed by NASA’s QuikSCAT satellite on September 21, 2005, at 08:43 UTC (4:43 p.m. local time). At this time, the storm had peak sustained winds of around 75 kilometers per hour (45 miles per hour; 40 knots). At the time of this observation, Damrey was not strong enough to be classified as a typhoon (the term for a hurricane in this part of the world), but Damrey was projected to continue to gather strength as it crossed the South China Sea.

Measurements of the wind strength of Tropical Storm Damrey show sustained winds similar to those shown by QuikSCAT observations. The scatterometer sends pulses of microwave energy through the atmosphere to the ocean surface, and measures the energy that bounces back from the wind-roughened surface. The energy of the microwave pulses changes depending on wind speed and direction, giving scientists a way to monitor wind around the world.

Tropical cyclones (the generic term for hurricanes and typhoons), however, are difficult to measure. To relate the radar energy return to actual wind speed, scientists compare measurements taken from buoys and other ground stations to data the satellite acquired at the same time and place. Because the high wind speeds generated by cyclones are rare, scientists do not have corresponding ground information to know how to translate data from the satellite for wind speeds above 50 knots (about 93 km/hr or 58 mph). Also, the unusually heavy rain found in a cyclone distorts the microwave pulses in a number of ways, making a conversion to accurate wind speed difficult.

However, at the time of this image, Tropical Storm Damrey’s winds were still low enough that scientists had reliable comparisons from buoys on which to make wind-speed estimates. As wind speeds increase, however, QuikSCAT’s ability to accurately monitor the storm’s interior wind speeds will be reduced. Values around coastlines are also less reliable as complex interactions between the land, sea, and air can distort surface wind patterns.

Typhoon Damrey formed northeast of the Philippines on September 20 and gathered strength to become a typhoon on its way to Hong Kong, Hainan, and northern Vietnam. It is the 18th typhoon to strike China in 2005.