First Snow in US Northeast 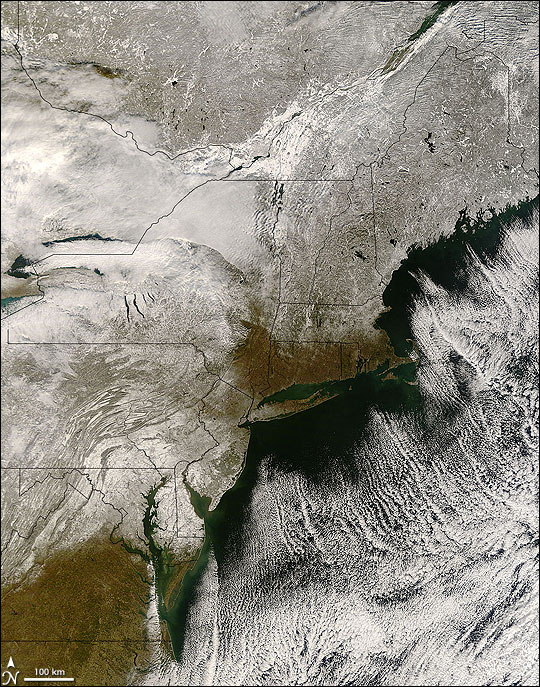 A string of storms brought the season’s first snow to the eastern United States from the mid-Atlantic states to New England during the first week of December 2007. By December 6, most of the clouds had cleared, providing the Moderate Resolution Imaging Spectroradiometer (MODIS) on NASA’s Terra satellite this view of the snow-covered landscape. The snow highlights the contours of the land. Waves and curves follow the gentle folds of the Appalachian Mountains through Virginia, West Virginia, Maryland, and Pennsylvania. The more rugged mountains of New Hampshire, Vermont, and New York wrinkle the surface of the land.

The snow also makes rivers and lakes more visible than they might otherwise be. The dark blue-green Finger Lakes of upstate New York pop out against the surrounding white land. The long narrow lakes formed when glaciers scoured, deepened, and eventually dammed stream valleys. The lakes point north and northwest to the shores of Lake Ontario, portions of which are visible beneath a bank of clouds in this image. The northern shore of Lake Erie similarly peeks through the clouds to the west. In the far north, particularly in Maine and Canada, lakes have already started to freeze. The ice is a smooth, bright white surface in contrast to the slightly darker land.

To the south, snow-covered Maryland surrounds the northern Chesapeake Bay, starkly outlining the ragged shoreline where rivers and streams enter the bay. The largest river flowing into the Chesapeake is the Susquehanna, which cuts southeast across the Appalachian Mountains of Pennsylvania.

You can also download a 250-meter-resolution KMZ file of the snow storm suitable for use with Google Earth.

Acquired March 6, 2010, this true-color image shows snow cover over the eastern reaches of Canada and the United States. Snow cover appears the most opaque in Ohio, central New York, and between Lake Huron and its neighboring lakes to the east.