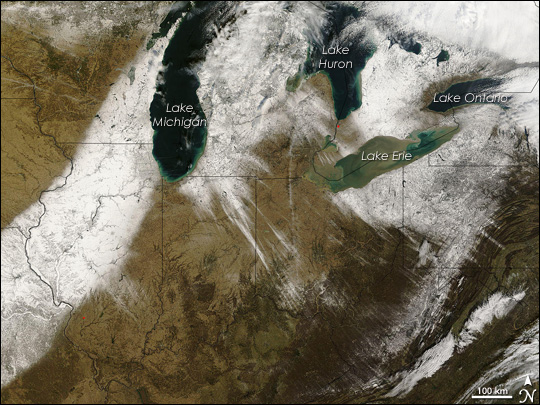 Like light radiating from the Sun, streamers of snow streak southeast from the Great Lakes in this photo-like image, collected by the Moderate Resolution Imaging Spectroradiometer (MODIS) on NASA’s Terra satellite on December 9, 2006. The snow seen here came from two different storms. The broad swath of white extending from the left edge of the image to Lake Michigan was deposited on December 1 by a powerful winter storm that left thousands without power for many days.

The snow on the southeastern side of the Great Lakes, however, fell on December 7 and December 8 as lake-effect snow. Lake-effect snow occurs along the southeastern edge of the Great Lakes when icy wind blows across the lakes from Canada. The wind picks up relatively warm, moist air over the lakes and pushes it over land, where the air is cooler. When the moist air encounters cooler temperatures over land, the water condenses into precipitation, which in this case fell as snow. The signature of lake-effect snow is striking in this image. A field of white lines the southeastern shores of each of the Great Lakes. The strong winds that generated the snow left their imprint in the form of long streamers of snow that extend all the way to the deep brown folds of the Appalachian Mountains along the right edge of the image.

Daily images of the United States can be viewed on the MODIS Rapid Response web site. The tiny red dots in this image indicate where MODIS detected fires.