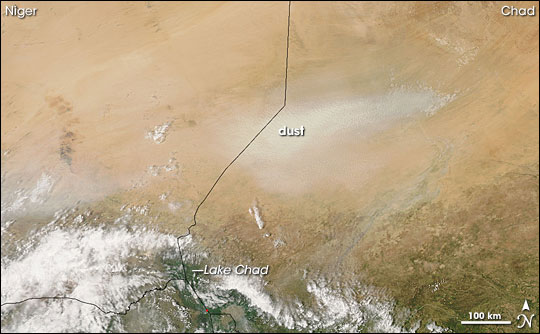 Resting between two mountain ranges in Chad, downwind from a natural wind tunnel, the Bodele Depression provides a steady supply of Saharan dust plumes. On September 17, 2007, the Moderate Resolution Imaging Spectroradiometer (MODIS) on NASA’s Aqua satellite captured one such plume blowing toward the southwest. In this image, the dust appears as an off-white blur that expands as it approaches the border with Niger. To the south of the plume, partially hidden by clouds, lies Lake Chad.

Barren and lifeless as the Bodele Depression may appear, it actually helps sustain life half a world away. Minerals in Bodele dust plumes play a crucial role in fertilizing soils in the Amazon Rainforest.