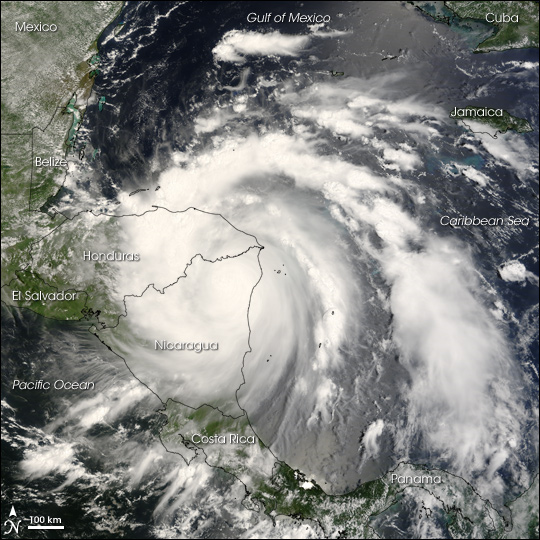 Category 5 hurricanes are rare. Rarer still is the storm that makes landfall as a Category 5 storm—most weaken before hitting land. Yet, exactly two weeks after Hurricane Dean struck the Yucatan Peninsula as a Category 5 storm, Hurricane Felix roared ashore as yet another. Felix came ashore over northeastern Nicaragua on September 4, 2007, with sustained winds of 260 kilometers per hour (160 miles per hour), said the National Hurricane Center. Forecasters predicted that Felix would continue to move west over Honduras, El Salvador, Guatemala, and Mexico. Heavy rain in these mountainous regions could trigger devastating floods and mudslides. This area is the same region which suffered major damage from Hurricane Mitch in 1998. Though better prepared this time for such a storm, many fear a repeat of Mitch’s devastation.

The Moderate Resolution Imaging Spectroradiometer (MODIS) on NASA’s Terra satellite captured this image of Hurricane Felix at 10:10 a.m. local time (16:10 UTC) on September 4, 2007. At that time, Felix had slammed into the mountains of Nicaragua and lost enough power to be rated a Category 3 hurricane, with sustained wind speeds of 200 km/hr (120 mph). The clear eye present on September 3 was gone, but the storm retained the tight spiral shape of a very powerful storm.

You can download a 250-meter-resolution KMZ file of Hurricane Felix suitable for use with Google Earth.

Hurricane Felix came ashore in Nicaragua on September 4, 2007, as a Category 5 storm, the strongest rating on the Saffir-Simpson scale.