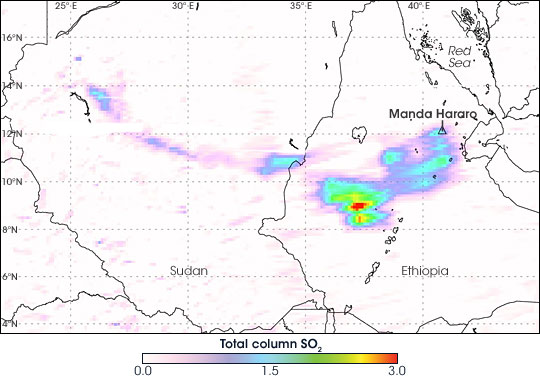 In western Afar, Ethiopia, sits a massive volcano complex, roughly 105 kilometers (65 miles) by 25 kilometers (15 miles). Known as Manda Hararo, the area had not been known for eruptive activity, but in August 2007, satellite, aerial, and ground-based observations showed the volcanic complex coming to life. According to a report from the Smithsonian Institution, an August 16 inspection of the site showed lava flows—including splattering and bubbling lava—from fissures in the complex, as well as sulfur deposits. On August 13, satellite observations detected gaseous emissions of sulfur dioxide.

The sulfur dioxide concentrations are measured in Dobson Units. If all sulfur dioxide in the air column the satellite observed were flattened into a thin layer at the surface of the Earth, one Dobson Unit would make a layer of pure sulfur dioxide 0.01 millimeters thick, assuming the temperature was 0 degrees Celsius. According to the U.S. Environmental Protection Agency, hazards posed by sulfur dioxide include breathing difficulties, visual impairment, and acid rain.