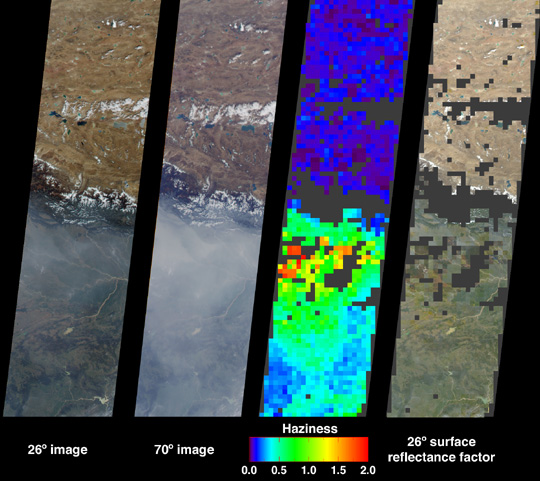 Large abundances of aerosols, or airborne particulates, over the low-lying plains of northeastern India appear in dramatic contrast with the relatively pristine air of the high-altitude Tibetan Plateau. This contrast is illustrated in these Multi-angle Imaging SpectroRadiometer images from October 15, 2001. These data represent an area of about 400 kilometers wide by 1600 kilometers long. The aerosols that contribute to poor air quality over much of the Indian subcontinent are believed to originate from industrial smoke, vehicle emissions, and biomass burning.

The two images at left show the scene from MISR's 26-degree and 70-degree forward viewing angles, respectively. The high levels of aerosols are accentuated in the 70-degree forward image, due to the longer atmospheric path length associated with the more oblique viewing angle. The abundance of aerosols is derived from the variation of scene brightness and contrast as a function of observation angle, and is displayed in the third panel from the left as optical depth. This quantity is logarithmically related to the atmosphere's ability to transmit light, and is one of several variables used to characterize the climatic and environmental influence of aerosols. Areas where retrievals were not obtained, such as the topographically complex Himalayas in Nepal, and cloudy or very turbid areas, are shown in dark gray.

Surface calculations for the 26-degree view direction are shown in the rightmost panel. These calculations use the optical depth field to estimate surface reflectances as if the intervening atmosphere were not present. Making corrections for atmospheric scattering is important when using reflectances measured from space in surface classification and physical process studies. Note that the algorithms used to produce these results are still being refined, and future product versions may show some differences from the preliminary values displayed here.