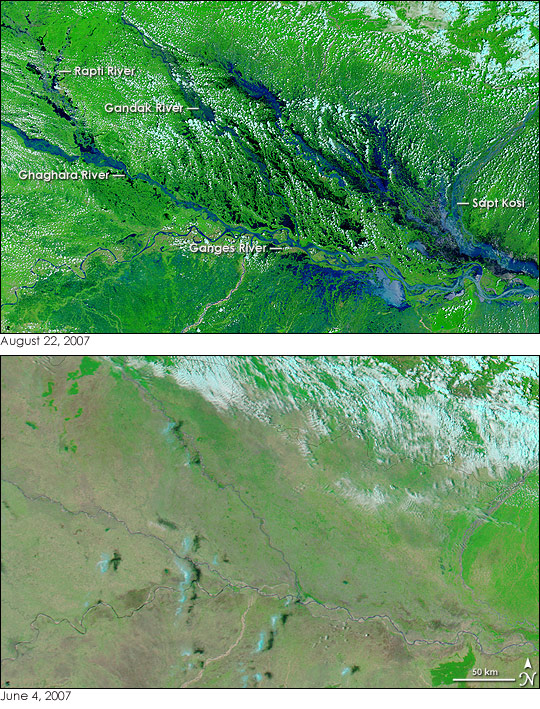 Though the floods were receding, water still covered much of the Ganges Plain on August 22, 2007, when the Moderate Resolution Imaging Spectroradiometer (MODIS) on NASA’s Terra satellite captured the top image. The Ganges and its tributaries swell every summer with melting snow from the Himalaya Mountains and persistent rains from the Southwest Asian Monsoon, but 2007 produced larger floods than most other years. As of August 22, the unusually heavy monsoon had killed 2,106 people throughout India as a result of drowning, structure collapse, waterborne disease, or snakebite, said the Government of India. The worst-hit region was the northern state of Bihar, where 18 million people were hit by flooding when the Ganges and its tributaries overflowed, according to a Deutsche Presse Agentur report issued on August 22.

The top image provides an unusually clear view of the Bihar region in a combination of visible and infrared light. The few clouds (pale blue and white) that clutter the scene are small. Water, ranging in color from light blue to black, flows across much of the landscape. Places where the water is muddy or shallow are lighter in color. Reflected sunlight also lightens the color of the water along the right edge of the image. The areas that aren’t covered in water are bright green with vegetation. Before the monsoon rains started, the land was sparsely vegetated, as shown by the tan-pink color of the lower image. As the top image shows, a large portion of the state remained underwater. Nearly one million hectares of arable land flooded in Bihar, reported Reuters on August 22.

Daily images of India are available from the MODIS Rapid Response System.

India's annual monsoon triggered widespread flooding throughout the country in July and August 2007.