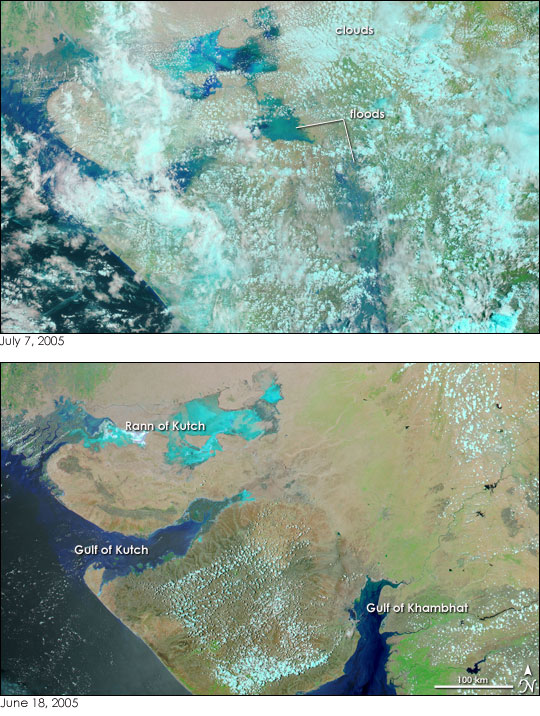 Much of India’s Gujarat state was under water when the Moderate Resolution Imaging Spectroradiometer (MODIS) on NASA’s Terra satellite captured the top image on July 7, 2005. News reports say that at least 132 people have died and thousands were stranded when monsoon rains caused widespread flooding along the northwestern coast of India.

The floods are visible in the top image as dull blue smears over the land. Clouds, which are light blue and white in this false color scene, partially obscure the region. In contrast to the bottom image, which was taken on June 18, 2005, before the monsoon rains began, water stretches tens of kilometers east of the Gulf of Kutch and north of the Gulf of Khambhat. It is in these regions that people have been most severely affected by flooding. To the north, the Rann of Kutch—a shallow inland sea that fills during the rainy season—has also expanded.

These floods would not be visible in a true color, photo-like version of the image. The muddy flood water blends with the surrounding desert landscape. The false color version of the image makes water stand out vividly from the land. The MODIS Rapid Response Team provides daily images of the region in both true and false color.