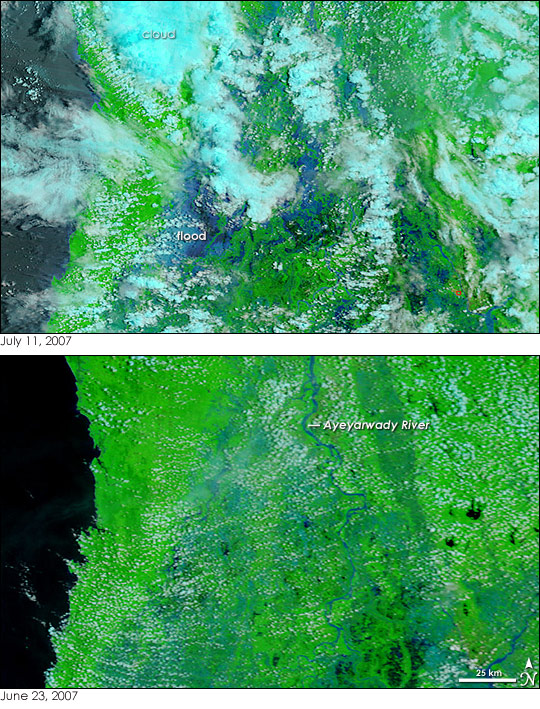 Myanmar (Burma) regularly floods during the Asian summer monsoon, but June and early July 2007 brought unusually heavy, in some places record-breaking, rainfall. The rain caused floods in central Myanmar that forced thousands of evacuations, said ABC News on July 9. The Moderate Resolution Imaging Spectroradiometer (MODIS) on NASA’s Terra satellite captured the top image of the floods on July 11, 2007. Clouds, bright blue and white in the false-color image, cover much of the country, but widespread flooding is still evident on the ground. Water is black in this type of image, which is made with a combination of infrared and visible light. When loaded with sediment, the water takes a lighter color. The palest blue areas may be either wet ground or extremely muddy water. Plant-covered land is bright green.

Terra MODIS acquired the lower image on June 23, well after the monsoon rains began to fall. The traces of light blue that surround the river in this image may be wetland or early signs of flooding. The floods inundated the capital, Yangon (Rangoon), to the south of the region shown in this image and Bago, a city to the east of this area. These areas are shown in the large image.