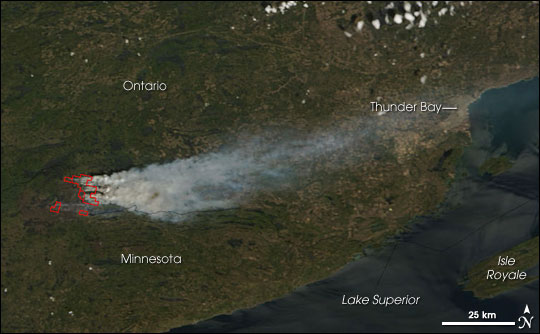 Along the Minnesota-Ontario border, the Ham Lake Fire was billowing a thick cloud of smoke toward the east on May 10, 2007, when Moderate Resolution Imaging Spectroradiometer (MODIS) on NASA’s Terra satellite captured this image. Places where MODIS detected actively burning fire are outlined in red. Smoke reaches the city of Thunder Bay, on the shores of Lake Superior.

According to reports from the National Interagency Fire Center on May 11, the fire was burning in timber and dead fuel, and had affected 50,000 acres. Only 5 percent contained, the blaze was threatening residences and commercial property and had forced evacuations in surrounding communities.

The large image provided above has a spatial resolution (level of detail) of 250 meters per pixel. The MODIS Rapid Response Team provides twice-daily images of the region in additional resolutions and formats, including an infrared-enhanced version that highlights the burn scar on the ground.