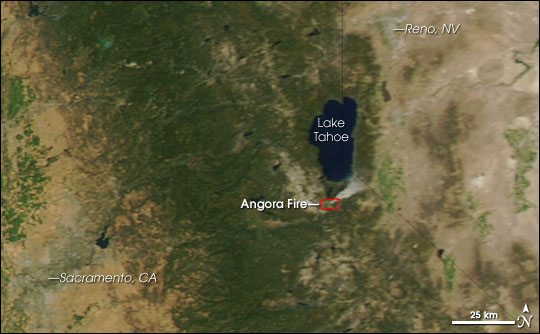 South of Lake Tahoe, which straddles the Nevada-California state line, a large fire destroyed at least 165 homes over the weekend of June 23, 2007. This image from the Moderate Resolution Imaging Spectroradiometer (MODIS) on NASA’s Aqua satellite shows the Angora Fire on June 24. The area in which MODIS detected actively burning fire is outlined in red. A plume of brownish-gray smoke spreads northeast.

According to the June 25 report from the National Interagency Fire Center, the Angora Fire was burning in timber and grass, was about 1,800 acres, and was zero percent contained.

The large image provided above has a spatial resolution (level of detail) of 250 meters per pixel. The MODIS Rapid Response Team provides twice-daily images of the region in additional resolutions and formats, including an infrared-enhanced version that makes the burned area stand out from the surrounding, unburned vegetation.

More than 200 homes were destroyed in a fast-moving wildfire south of Lake Tahoe that started over the weekend of June 23, 2007.