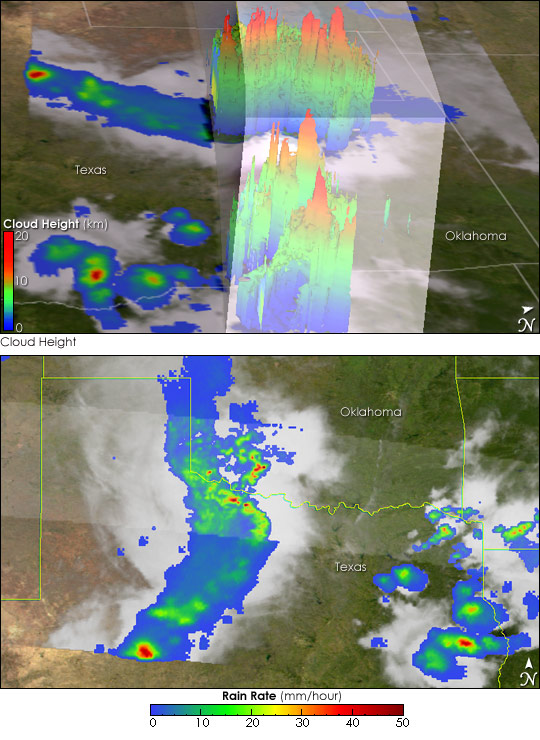 Towering clouds characterize violent thunderstorms in northern Texas and southern Oklahoma in this three-dimensional image. The Tropical Rainfall Measuring Mission (TRMM) satellite took the image on May 8, 2007, at 7:30 p.m. local time. The tallest clouds shown here reach a height of 14 kilometers (8.7 miles) above the Earth’s surface. Thunderstorms form as warm, fast-rising air carries heat from the Earth’s surface higher into the atmosphere. When water vapor in the air cools in the atmosphere, it forms clouds. Over time, the clouds grow, and rain begins to fall. The higher the air rises before forming clouds, the taller the resulting cloud will be and the more violent the storm will become. Violent thunderstorms often bring heavy rain or hail, lightning, strong winds, and occasionally, tornadoes. It is not unusual then, that the towering clouds coincide with areas of heavy rainfall, as shown in red in the lower image.

A pale, transparent white band marks out the path of TRMM’s precipitation radar in both images. The satellite swath runs roughly east-west across the lower image, which is oriented with north up. The top image has been rotated so that the path of the precipitation radar runs vertically across the image. The perspective is similar to one you might have if you were looking west across Texas from high above its eastern border. The three-dimensional image, taken by the precipitation radar, shows two clusters of storms, one near the Texas panhandle and one over the northeast border. The lower image illustrates how intensely the rain was falling within a line of storms. The most intense rain is marked in red, while areas of light rain are blue. The TRMM Microwave Imager recorded these rain rates, and they laid over an infrared image captured by the TRMM Visible Infrared Scanner.

Flood-inducing rain drenched the U.S. Midwest during the first week of May 2007.