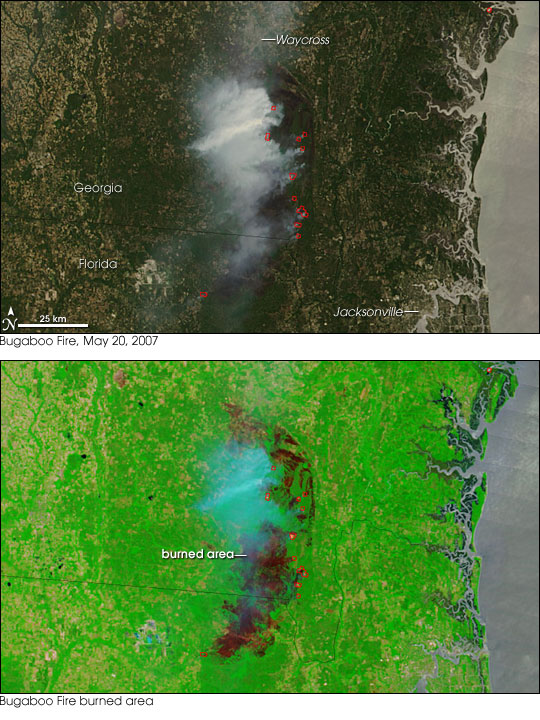 The Bugaboo Fire (called “Bugaboo Scrub” in Georgia and “Florida Bugaboo” in Florida) marched across the Okefenokee Swamp and adjacent land, including pine plantations and state parks, in Georgia and Florida in May 2007. As of May 20, the Southern Area Coordination Center estimated the size of the affected area as more than 287,000 acres (1,161 square kilometers). A lightning strike started the blaze on Bugaboo Scrub Island in the Okefenokee Swamp in southeastern Georgia on May 5, and the fire engulfed thousands of acres a day as it spread south into Florida.

This pair of images from the Moderate Resolution Imaging Spectroradiometer (MODIS) on NASA’s Terra satellite shows the fire on Sunday, May 20, at 12:20 p.m. The top image is a photo-like view of the area, while the bottom image has been enhanced with shortwave- and near-infrared light detected by MODIS to highlight the burned area, which appears brick red. Vegetation appears bright green, and water appears dark blue. Places where MODIS detected actively burning fires are outlined in red.

Fires are not uncommon in the peat-rich swamps of the southeastern United States. The Okefenokee Swamp harbors diverse vegetation communities, from marshes to tree-covered islands. During times of drought, the thick layers of peat—dead vegetation that doesn’t decay because it is submerged in water—dry out and become extremely flammable, as do the marsh grasses and scrub vegetation. Southern pine trees add to the flammability. In May 2007, southeastern Georgia and northern Florida were experiencing extreme drought, according to the U.S. Drought Monitor, which increased the risk that any fires that did start this season would become large and out-of-control.