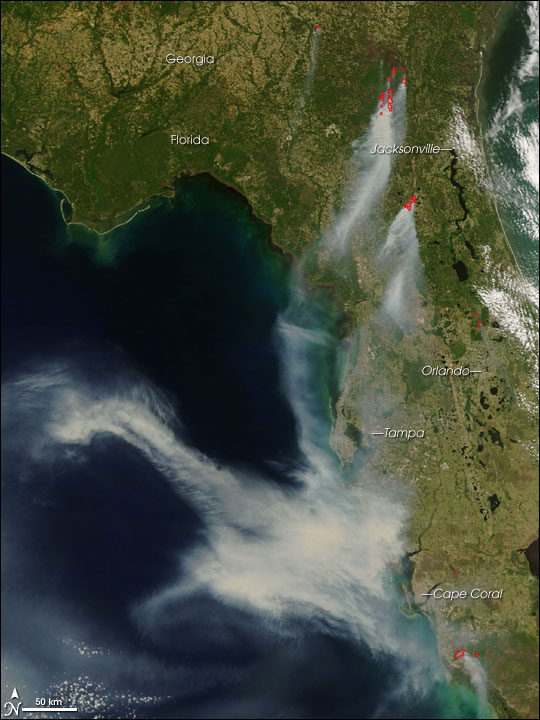 On Tuesday, May 8, 2007, fires in Georgia and Florida churned out thick plumes of smoke that flowed south and then west over the Gulf of Mexico. When the Moderate Resolution Imaging Spectroradiometer (MODIS) on NASA’s Terra satellite passed overhead that morning, it captured this image of the fires and the thick smoke. Places where MODIS detected actively burning fires are outlined in red.

Northwest of Jacksonville, Florida, numerous fires were burning in a wide variety of landscapes in and around the Okefenokee Swamp, including hardwood and pine forests, pine plantations, brush, and saw grass. Fires had been burning in this area since mid-April. Between Jacksonville and Orlando, a cluster of brushfires near the town of Starke forced hundreds of people to evacuate from their homes on Tuesday. Southeast of Cape Coral, the Balsa Fire was burning in chaparral on the outskirts of Everglades National Park.

Fires are not uncommon in the swamps and southern pine forests of the Southeast. Many of the plant communities are adapted to fire and depend on it for clearing the ground to make way for new seedlings. According to the U.S. Drought Monitor, drought gripped the Southeast as of May 1, 2007, with the level reaching “extreme” in southeastern Georgia, northern Florida, and southern Florida. Throughout the rest of Georgia and Florida, drought was moderate to severe. The drought would make it easier for both natural and human-caused fires to become large and out of control.

The high-resolution image provided above has a spatial resolution of 250 meters per pixel. The MODIS Rapid Response Team provides the image in additional resolutions.