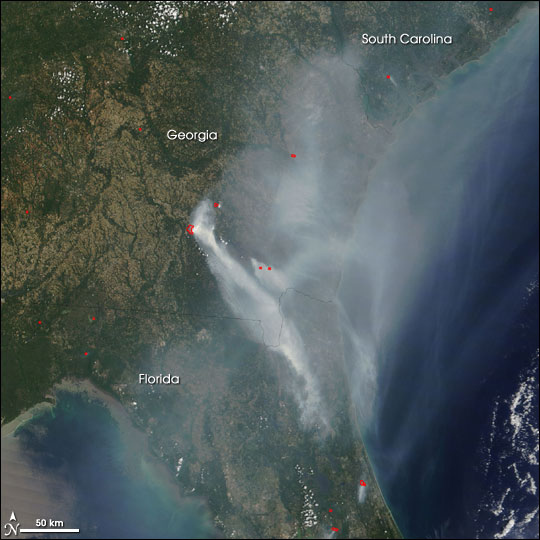 Smoke hung over the coasts of Florida, Georgia, and South Carolina on May 2, 2007, when the Moderate Resolution Imaging Spectroradiometer (MODIS) on NASA’s Terra satellite passed overhead and captured this image. Several large fires have been burning in Georgia for weeks, and because some parts of the fires are burning in inaccessible swamps, they will probably not be fully contained until significant rain falls on the area, according to reports from the Southern Area Coordination Center.

MODIS detected actively burning fires in several locations, which are marked in red. The most prominent fire in the scene is the Roundabout Fire in Georgia. To its southeast, two “hotspot” locations surrounded by thick smoke may be active locations of either the Sweat Farm Road or Big Turnaround Complex Fires; these two fires are burning adjacent to each other in the northern parts of the Okefenokee Swamp.

The large image provided above has a spatial resolution (level of detail) of 250 meters per pixel. The MODIS Rapid Response Team provides twice-daily images of the United States in additional resolutions.