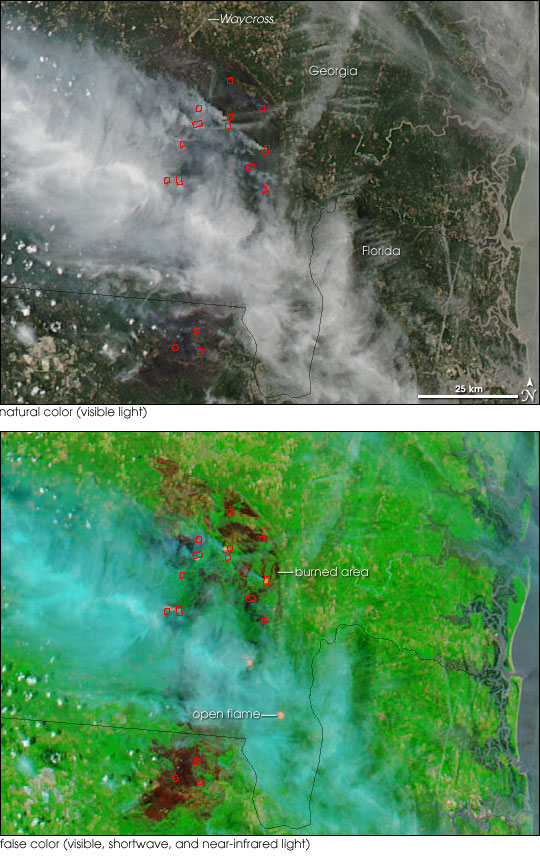 Scattered clouds over Florida and Georgia during the last week of May 2007 made it difficult for NASA satellites to capture images of the sprawling Bugaboo and Big Turnaround Complex Fires. The Bugaboo Fire had been burning on either side of the state line in the Okefenokee Swamp since the first week of May. The Big Turnaround Complex southeast of Waycross, Georgia, had been burning since mid-April.

This pair of partly cloudy images was captured by the Moderate Resolution Imaging Spectroradiometer (MODIS) on NASA’s Aqua satellite on May 30, 2007. The top image is a photo-like version of the area, while the bottom image is an infrared-enhanced version that highlights the burned areas. Places where MODIS detected actively burning fire are outlined in red. In this type of false-color image, bright pink (glowing) areas often indicate open flame. (The absence of a “hotspot” outline around some of these glowing areas is probably because clouds or smoke interfered with the automatic fire-detection process.) The exact boundary between the fires is not clear; in essence there is a mammoth fire burning in a broken line more than 50 miles long. A swath of clouds, partially mingled with smoke, cuts through the scene.

Southern Georgia and Florida are experiencing extreme drought. In the normally swampy terrain that is common in this part of the country, dead vegetation accumulates without completely decaying because it is frequently submerged in water. When these layers of dead vegetation, or peat, dry out, they are extremely flammable. Fire officials have said that these fires could burn for months; heavy rains over an extended period of time will likely be needed to totally extinguish them.

The large image provided above is the infrared-enhanced version at a spatial resolution (level of detail) of 250 meters per pixel. The MODIS Rapid Response Team provide twice-daily images of this area in both natural and false color in additional resolutions via a clickable map.